Full Moon of Werewolves: The Magic or Curse of the Moon & Prizes!

About today’s guest: Jennifer St. Giles
USA Today Bestselling Author, Jennifer St. Giles writes Contemporary Paranormal for Pocket Books and Gothic-Paranormal Historicals for Berkley Publishing. Former nurse and homeschooling mother of three, Jennifer has won a number of awards for writing excellence. She lives in a suburb of Atlanta, Georgia with her husband of twenty-four years, and a boat load of kids and pets who make the household the wildest most wonderful Grand Central Station in existence.

One lucky commenter will win a copy of Kiss of Darkness and a second will win a copy of Bride of the Wolf. So, TWO winners today! Just leave a comment on this post to be entered. Winner will be announced at end of Full Moon promotion. Last day to enter Saturday, April 25th at midnight central U.S. time.

We’ve all felt the lure of the moon. That ghostly orb in the night that adds mystery to the dark, romance to an evening stroll, and the magnetic pull that moves oceans and thrusts werewolves into the primal darkness of their hungers. So during Lori’s Full Moon of Werewolves Event that celebrates the release of her rocking story Dark Crusade, tell us what is your experience with the full moon? 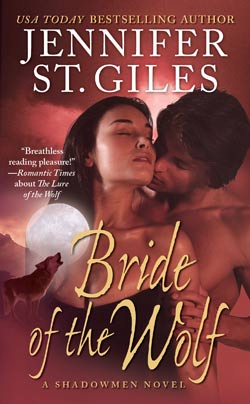 For me, I know it’s no myth or accident that lunar brought about lunacy. As a nurse I spent many full moons working the night shift in hospitals and whenever a full moon hung fat and bright in the sky, everything that could go awry from the ER to the OR did. And so it is with my werewolves in my Shadowmen series. The moon holds these warriors captive to their base cravings and as they battle the evil threatening the world, they must also fight the growing urges within themselves.

Excerpt from Bride of the Wolf by Jennifer St. Giles Coming April 28, 2009.

The moon crested over the trees and sent a slice of light down, casting the shadows from his face.

Her breath caught at the thrill of his roughly hewn features, towering strength and yet gentleness. How could she explain her confusion? “I…I feel the pleasure. Dios, it is something I’ve never known and will never forget, but–”

“Aaah!” Navarre cried out, his back arching and his limbs shuddering. His cane flew from his hand and he nearly flung her off balance before he released his death grip on her hand. He cried out again and his body twisted forward. He landed on his knees and looked up to the sky.

“By Logos…save me!” he yelled.

“Navarre? Dios mio, what is wrong?” Marissa grabbed his shoulder, wishing she could see into his mind as he saw into hers.

A scream of pure torture ripped from his lungs and suddenly his muscles bulged, everywhere, nearly doubling his body mass. It seemed to her that bones cracked and stretched in painful succession, one after another. His neck, back, arms changed, then his hands, his fingers turning into sharp-nailed claws. Legs, thighs, calves, and feet. Black hair erupted from his smooth skin, covering his chest, back, arms, and face. Fangs projected from his upper jaw.

He was the creature again, only this time even bigger. But it was more than that. She sensed a primal savagery oozing from him. She stumbled back, lost her step, and would have fallen into the water if he hadn’t reached out and grabbed her arm. His claws painfully scratched her skin.

“Navarre? Madre de Dios, what has happened? You’re…you’re the creature again. What has Herrera done to you?”

Breathing heavy, he released his hold on her arm and she saw she was bleeding.

He grabbed her arm again, bringing her scratches to his nose and inhaling. Then he licked the blood on her arm.

She cried out and he jumped back, pulling away from him.

“Hurt you,” he said, his voice grated like broken glass.