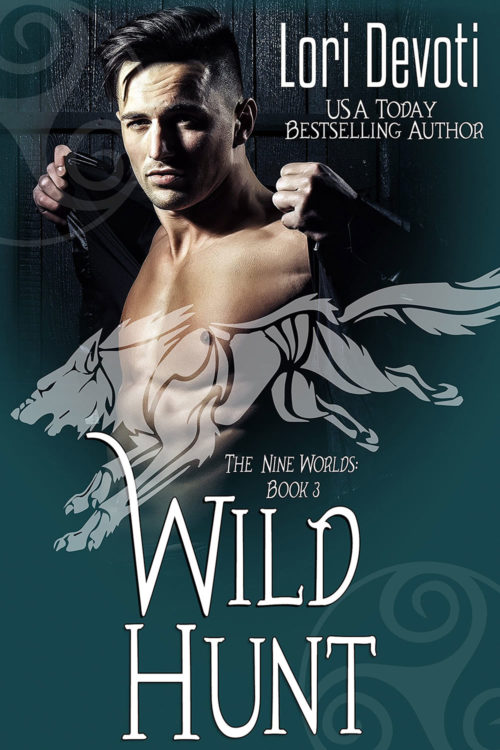 Enemies to lovers? Or enemies to the end?

But the legendary horn of the Wild Hunt has been silent for centuries.

No hounds called. No souls captured.

The battle starts anew. Except this time, one hellhound has his own goals for the hunt.

Alpha hellhound Venge Leidolf plans to steal the horn for himself and use it to direct the Wild Hunt in his own mission of revenge.

Valkyrie Geysa is just as determined to stop the Hunt from forming again, from hunting innocents again, and to seek revenge for the family it took from her already.

Venge is willing to give up everything to harness the power of the hunt, even his own soul.

Geysa will stop at nothing to destroy the Hunt and its horn forever, even if it means killing every hound who would run in the Hunt too.

Neither counted on love complicating their choices.

Neither thought anything would be more important than their goals.

In the end, which will win: the Hunt or love between destined enemies?

The familiar smell of decades of alcohol spilled onto battered wood and the sound of bottles sliding across table tops as patrons turned to size up the newest intruder assaulted Venge as he entered. He let their looks flow over him, his eyes returning their stares until one by one, they dropped their own back to their drinks. 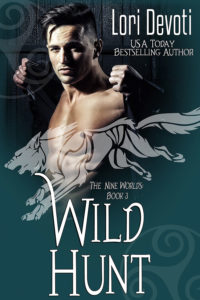 Bar patrons, he was as used to dealing with them as he was with handling his own rage. But…his gaze slid over the tables. These patrons were different. The normal scent of sadness and desperation was missing. Instead, the place teemed with aggression, eagerness for something. For what the horn had promised he guessed. And, even more unusual, the bar was filled with hellhounds.

Despite his best efforts to avoid such an event, Venge found himself surrounded by his own kind.

His brows lowering as he tried to figure out what all this meant, he strode to the bar. A woman possessing hair streaked with silver and a steely gaze stood behind it.

Not bothering to answer, Venge crossed his arms over his chest and studied her. One brow cocked, she met his scrutiny with a stare of her own.

“You drinking?” she added.

Not being able to peg the female unsettled Venge. He’d traveled to four of the nine worlds in the last five years and had come to know most of the inhabitants on sight. But this woman…he frowned. Despite the fact that she was behind the bar, a place he had come to associate with garm, she lacked the edge of wildness and scent of pine all garm possessed, and despite the fact the place was filled with hellhounds, she wasn’t one of his kind either. So, what was she? What other type of being would choose to serve a bar filled with hellhounds?

“If you’re new, you’ll need a place to stay. Best talk to Geysa.” She jerked her head toward a door in the back. “She’s in the kitchen now, but she’ll be out.” With that she turned her back on him and strode to the other end of the bar where the hellhounds he’d seen fighting outside had gathered.

A place to stay? Venge twisted his mouth to the side. He still didn’t know why he was here–or even where here was. It was like some strange dream. Somehow he’d fallen down the rabbit hole and found himself in a twisted version of the human world’s old West. He wouldn’t be shocked if the door the bartender had indicated flew open and the sheriff, six-guns blazing, barreled inside.

Instead, the door edged open, then bumped wider as another woman carrying a tray laden with plates pushed against it with a curvaceous, denim-clad hip.

As he looked at her, Venge became aware of the earth spinning on its axis, but slowly. Every movement the woman made seemed emphasized, slowed down, just for his enjoyment. She tossed her head, flipping her waist-long hair out of her eyes and away from the steaming plates. A few stubborn strands of the flame-colored locks refused to move, instead choosing to cling to her lips. She frowned and pushed her tongue out of her mouth, trying to shove the recalcitrant strands away, but it was a wasted effort. The strands hung there, somehow drawing attention to the perfect bow of her upper lip, and the impossible fullness of her lower.

With a sigh, she muttered something to herself and began maneuvering her way through the tables. Hellhound after hellhound stopped what he was doing and followed her with his gaze.

A surge in adrenaline and desire hit Venge like a boulder to the gut. She was almost next to him before he realized both were coming from him.

She brushed by him, barely giving him a glance, but he caught her scent–honey and spring. He inhaled, felt his nostrils flare, his eyes dilate.

He’d never wanted anyone or anything as badly as he wanted this woman. His feet shuffled forward, following her without his mind giving the movement a conscious thought. As he did, a hellhound at a nearby table surged to his feet, then another until all but a few were knocking over chairs and tables in an attempt to follow the red-haired siren.

“Geysa!” the woman from behind the bar yelled.

Geysa paused, her grey eyes flickering as she watched the males shove their way toward her. Her lips rounded into a perfect O, and the world picked up speed. The demanding desire Venge had felt just seconds earlier disappeared. He stumbled to a halt, a frown creasing his forehead as he blinked at the waitress. Still attractive, with red hair that danced around her oval face, full mouth, and a body that even clothed in loose jeans and a worn flannel shirt left no doubt of her gender. But that was all–just another attractive female. Not the irresistible, have-to-have object of desire she had been seconds earlier.

Her gaze wandered the crowd again, worry causing tiny lines to form at the edges of her mouth. When she reached Venge, she stopped. He could see her inhale sharply, her eyes bright, as if waiting for some response.

His frown deepened. He’d been trapped, almost unable to think of anything but this woman, and now nothing…at least nothing he couldn’t control. He purposely let his gaze roam her body, let her see him do it–just to show how unaffected he was.

To his surprise, instead of insulted she looked relieved, at least until she disappeared from sight, a group of hellhounds knocking her over as they continued to brawl around her.

Without stopping to wonder at his actions, Venge leapt over the table that had fallen in front of him and kicked the top two hellhounds off the pile of bodies and onto the floor. He was struggling with a third, a male with the flat face of a boxer, when the sound of an arrow piercing the air sang overhead. Heat singed the side of his face. He shoved the boxer out of his way, wrapped his hand around Geysa’s arm, and jerked them both away from the fray.

Sticking out of the nearest tabletop was a flaming arrow. Venge spun the waitress away and toward the door.

The bartender dropped a bow, then holding a four foot long sword, leapt onto the bar top. With an angry whack, she slammed the weapon into the bar, then stood there, her hand resting on the hilt.

“Let her go,” she demanded.

It took Venge to the count of three to realize the bartender was speaking to him. He glanced to where his fingers pressed against the ivory skin of Geysa’s arm. He had no reason to hold the waitress, hadn’t pulled her from the other hellhounds with that intention, but for some reason, no matter that his brain said to release her, his fingers were unable to comply.

“I said—” The bartender’s voice took on a new edge, like the shriek of an angry hawk.

“Yeah, she said to let her go.” The boxer scuttled to his feet and chest pushed out, sauntered toward Venge. “She’s mine.”

Venge tilted his head to look at Geysa. “Really?” he asked.

A huff of air escaped her lips, and she met his look, but her expression revealed none of her inner thoughts.

Irritation flickered to life inside him. If she wanted the flat-faced cur, he should hand her over, leave her to her fate.

His eyes narrowed, he stared at her. Was she so naive to think she could survive an encounter with the other hound? She was tall for a woman, with impressive muscle tone, if the bicep he gripped was any indicator, but there was no way she’d be able to survive an assault by a hellhound riled to bloodlust. And the flat-faced boxer was close to such a state–Venge could smell

Venge’s lips thinned, his index finger sweeping softly over the arm he held just to reassure himself he still had control.

At his small movement, Geysa tensed.

So, she wasn’t as oblivious to what was happening as she would have him think. He smiled, then cocked his head toward the other male.

“I don’t think so.” Then still smiling, he shoved his body in front of Geysa and grabbed the boxer around the throat. His fingers digging into the other male’s skin, Venge pushed him backward until the male was pressed next to the still crackling arrow. The smell of singed hair followed.

“In Wild Hunt (4.5), Lori Devoti provides yet another action-packed mythological tale. Her characters have depth, her plot is novel and her writing is strong. This is a great read!” —Alexandra Kay, Romantic Times Magazine, TOP PICK!

“The latest Wild Hunt saga is a superb romantic fantasy in which star-crossed lovers either must kill the other as it’s in their DNA imprint or let love lead them elsewhere. Venge and Geysa know they have quests to fulfill and that desire, attraction and that cursed L word are not convenient at this time and between their respective heritages at any time. Fans will relish this entry while newcomers will quickly become devotees of this excellent fantasist.” —Harriet Klausner

“The plot of Wild Hunt is masterfully carried out as each second brings forth a new revelation, many of them surprising and unforeseen. There was not a moment when I was not held ensnared by the happenings in the story, as each one became more significant in what would ultimately come to pass in the lives of Venge and Geysa.” —Amelia Richard, CataRomance.com

“Wild Hunt is a thrilling story that will delight romance readers with a taste for the paranormal. I am absolutely wild for this book and cannot recommend it highly enough!”
—Wild On Books

“I found Ms. Devoti’s vision of the Wild Hunt spellbinding. Her interpretation of hellhounds and Valkyrie is a delectable pleasure to read. She brought their emotions, their differences, their virulent tendencies to life for me. Heart thumping action and hot carnal sex scenes blended together to make an exhilarating reading experience. I encourage you to read Wild Hunt with an ice cold drink next to you. You may need it to cool down.” —Kim Swiderski, Writer’s Unlimited

“The story not only rivets but hooks the reader from the beginning and never releases until the conclusion in this romantic fantasy. Lori Devoti is an excellent storyteller that transports an outstanding romance onto paper like a lovely portrait being sketched. With a powerful plot, intriguing characters, and a romance that tests time, this is a splendid read.” —Cherokee, Coffee Time Romance