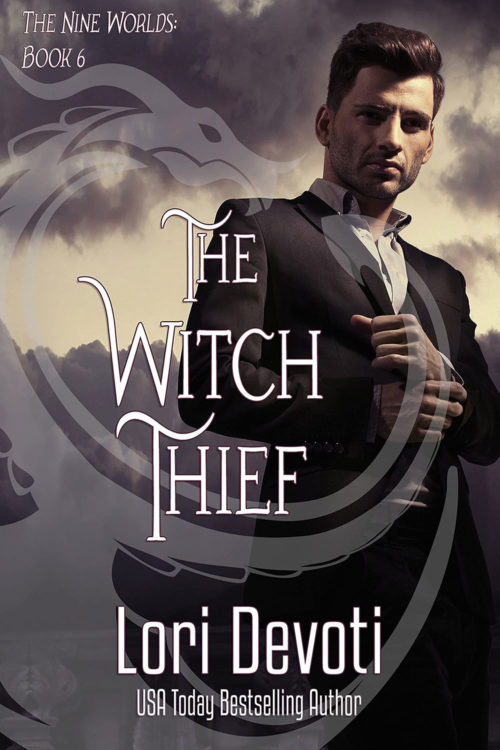 He who plots to hurt others often hurts himself.

Dragon-shifter Joarr Enge has waited a century for his revenge. And now the witch who betrayed him, stole from him, and got him imprisoned is within his grasp.

But she is also powerful and just as tempting as she ever was. Maybe more so.

Amma is a survivor. She didn’t target the dragon to hurt him, but a witch on her own has to do what a witch has to do… or end up dead.

Choices had to be made, and Amma made hers.

Now though, the dragon has turned and Amma isn’t the one in control.

Magic, fire, and ice will flow.

Secrets will be revealed.

And a millennia of traditions will be destroyed.

But in the end, will love conquer all?

“Where is the chalice? What did you do with it?” Joarr Enge picked up the dented metal lantern and peered through the glass. Amma, the witch whose spirit was trapped inside, refused to answer. 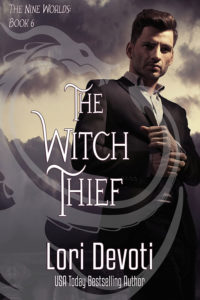 He shook the lantern. The needle that he’d used to pull Amma’s spirit from the body she’d occupied rattled against the glass windows. The body hadn’t been Amma’s. A misguided princess, thinking she would gain the witch’s powers, had forced Amma’s spirit into her body, but she had underestimated Amma’s stubbornness. Just as Joarr had. Amma would still be there, annoying her hostess, if Joarr hadn’t used the needle to pull her free. But he had and now he had her where he wanted her…or where he had thought he wanted her. Things were not going exactly as he had planned.

He glowered at the lantern. He should roast it, let an explosion of fire escape from his lungs until the object was no more than a bubbly puddle of melted metal and glass.

He let his thoughts pour from his eyes.

The witch inside the lantern stayed firmly hidden.

His fingers tightened around the metal handle and he dropped it to his side, hiding his frustration from her in case she was watching without his knowledge.

She is in there, he assured himself. She just refused to come out, had refused for the past month since he’d brought her back to his home. A home he hadn’t seen in over one hundred years, in great part because of this witch.

He cricked his neck from one side to the other, his mood growing darker as he remembered where he’d been, the state he’d been left in.

One hundred years stuck in his dragon form in a room that barely allowed him space to breathe much less turn around or stretch his wings. Nothing to look at but a blank stone wall. Nothing to smell but dirt and the hapless beings locked in the room he guarded. Nothing to taste…at all.

He blamed the witch for the experience. The least she could do was tell him what she’d done with the damn cup she’d taken from his cavern one hundred years earlier.

He growled and pulled back his arm. He was about to toss the lantern against the limestone fireplace when a knock sounded at his door.

Slowly, he lowered the lantern and placed it on the table. He tapped his finger against the top. “Saved for now, my witch thief, but not for long. Dragons’ memories are neverending, but their patience is short. And mine is about used up. I want my treasure returned.”

With a muffled curse, he strode to the door. Whoever was waiting on the other side had already lifted the knocker again and was in the middle of pounding the hunk of iron once more against the door. Joarr yanked it open.

Rike Nyhus, his dark brows drawn together in a V, stared back at him.

Without bothering with a greeting, Joarr turned and walked back into his small home’s main room, to the table and Amma. Let her hear what the representative of Ormar, the dragon army, had to say. In her current state, she wasn’t going anywhere or talking to anyone—not even him. Besides, he had no loyalty to the Ormar; he wasn’t obliged to keep their secrets.

He flung one leg over the worn wooden bench and waited for Rike to follow his lead. The lieutenant paused, the wind whistling behind him and snow blowing into the room around him. Finally, he stepped into the house and pulled the door closed.

Joarr folded his hands on the top of the table and waited. The Ormar had been harassing him since his return, insisting he pay the past century of taxes. Warm, fuzzy group that they were, not one had asked where he had been for the past hundred years. Not one had expressed concern, joy or even dismay at his return. He’d walked into his home and been greeted with their threats.

Not that he’d expected anything less from their cold, reptilian hearts.

Rike stopped beside the table. His dark gaze was steady. Joarr returned it with the same bored confidence he’d shown at each of their visits. But this time something was different. Rike looked tired…worried.

“It is good to see you, Chalice Keeper,” the lieutenant said.

The lieutenant glanced around the room. “You have been gone awhile.”

“I explained why when you were here the first five times seeking your taxes.”

“Yes, the taxes.” Rike looked around again. Giving Joarr the distinct feeling he was looking for something. Though tempted to glance to the side, Joarr kept his gaze away from Amma’s lantern, instead staring steadily at the older dragon’s face.

“Have you had a change of heart?” Joarr asked. It was an asinine question. It was hard to change a heart that didn’t exist. “Have you come to remove your demands?”

Joarr expected the lieutenant to laugh. To his surprise the other dragon didn’t. Instead he leaned forward. “As I said, you’ve been gone a long while. Has anything gone missing in your absence, like, say, the chalice?” There was a flash of fire in his eyes.

Joarr’s lips formed a line. How could they know?

He laid two fingers against his brow, as if Rike’s question bored him. “I know how important the chalice is. Don’t you think I’d have mentioned it if it had gone missing? I am the Keeper.”

“A job I know, since being orphaned, you take seriously,” the lieutenant replied.

Joarr kept his expression bland. They both knew Rike’s words were far from the truth.

Joarr hadn’t asked to be entrusted with the dragons’ damned holy artifact. Hadn’t asked for anything except to be left alone. He’d inherited the job as a child when his father’s death had left him orphaned.

His fingers twitched. Again he resisted glancing at the lantern. He had every intention of getting the chalice back, would have had it by now if the witch had cooperated just a little.

Rike touched one hand to his own shoulder and jerked the dragon-army badge off his tight-fitting shirt. Joarr’s gaze traveled from the bare place where the patch had been back to Rike’s face. This time it was harder to keep his expression blank.

“I am not here as a representative of the army,” Rike said. He angled a brow. “Am I still welcome?”

Joarr flipped both hands up. “More so.” He leaned back, his gaze on the lieutenant. This conversation was not going where he had expected. It at least might prove interesting.

Rike followed Joarr’s example and straddled the other bench. “Will you produce the chalice now?”

Joarr didn’t reply. It was obvious the lieutenant knew he’d lost the thing.

Rike let out a breath, a hiss actually. “It’s true. You’ve lost it. How? For how long? Has it been missing the entire time you’ve been gone? Are you that irresponsible to leave us unguarded?” He stood up, knocking against the table, shoving it into Joarr and causing Amma’s lantern to rattle.

Joarr placed his hand over the top of Amma’s lantern, stilling it, then replied, his words calm and controlled. “What makes you think it is missing? What great catastrophe has befallen the dragons? I’ve been home a month and no one has asked about the relic, no one has come to me with tales of apocalypse. Are you saying I missed this massive disaster, or that you just forgot to mention it until now?”

Personally, Joarr didn’t believe the legend that surrounded the chalice; he never had. His desire to get the thing back had nothing to do with its supposed power and everything to do with the Ormar believing in its power. If he had been able to find a fake that would have satisfied their skeptical eyes he would have tossed it where the original had been and gone on.

But an ancient artifact, with or without real power, was hard to fake, especially when dealing with dragons.

Rike placed his palms flat on the table and stared into Joarr’s eyes. “Things have happened. We didn’t see reason to tie them to the chalice since we believed it here, safe. We believed the Keeper would have told us, if it wasn’t.”

Tsk-tsk. Joarr had been a very bad Keeper indeed. He raised both brows. “I repeat—it couldn’t have been that bad or—”

Rike leaned across the table, grabbed Joarr by the front of his sweater and jerked him close. “A dragon died—a young, strong dragon—for no reason. No wounds, no tales of glory-seeking heroes. He. Just.

Joarr closed his lips, cutting off the rebuttal that had already started to form in his mind. Dragons didn’t just die. Yes, they were killed, like his father had been, but even that was rare. Dragons were the most magical and strongest of all the beings in the nine worlds. They feared no one.

Seeing that his words were having an effect, Rike loosened his grip. “And yesterday, there was a second. Exactly the same—young and strong. No battles, no wounds.” He let go of Joarr and fell back onto his bench. He turned to the side and stared at the dishes still piled in Joarr’s sink from breakfast. There were shadows under the older dragon’s eyes, and his hand trembled when he reached up to run it over his face.

“About five years ago, the first one, one of our youngest, went off to play—roamed the nine worlds. He was gone for a year, nothing unusual, but when he came back he was tired and stayed to himself. We left him alone, until we realized it was more than that. He had seemed normal at first, was able to shift, to fly, make fire, everything, but as time went on he grew weaker and weaker. He lost one ability after another until he was nothing but a shadow of himself. Our physicians could find nothing wrong with him, and we couldn’t tie what was happening to anything he’d encountered while gone. He’d been to all the worlds, been in fights, stolen treasure, done all the things the young do before settling down. We didn’t even know if it was…

“The Witch Thief is an imaginative paranormal romance full of unusual characters and imaginative scenarios.” —A. Richard, CataRomance Reviews, 4.5 Stars