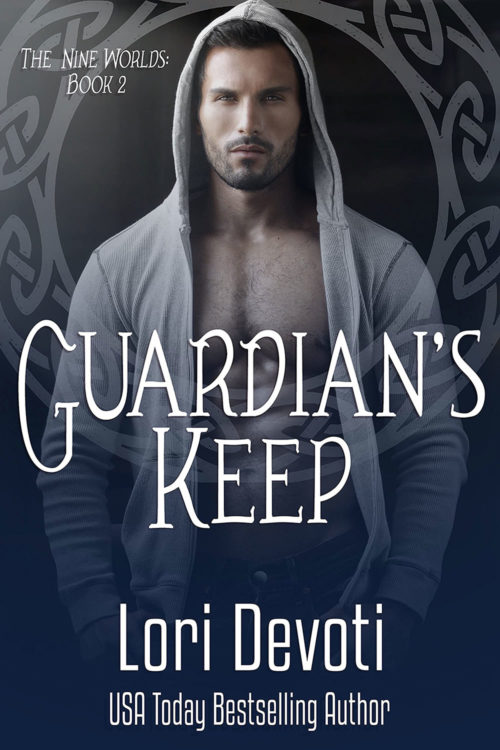 Kol Hildr values nothing more than his portal and protecting it from those who would steal it. A wolf shapeshifter, Kol is one of the most trusted guardians in the Nine Worlds. Neither his portal nor his heart have ever been breached. That is until he meets witch Kelly Shane.

Twin witch Kelly has a score to settle with the wolf shapeshifter and will do anything to close the gateway that he is bound to protect.

An alliance between the witch and guardian risks everything they both think they want, but neither can walk away. Not until Kol’s portal is lost and Kelly’s life is in question.

Will they give up everything to save the unlikely love they’ve found together? Or go back to what they’ve known, alone?

The bar was full tonight, the air thick with smoke—not unusual for a Friday night at the Guardian’s Keep. Also not unusual, at least lately, the place was laden with tension, every customer coiled and ready for the hell that was about to break loose.Every customer but one, that was. 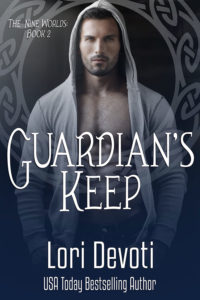 Kol Hildr dropped the damp cloth he’d been using to rub down the top of the bar and stared at the tiny figure slipping through the crowd in a direct path to the back of the room, to a booth right next to the four male challengers he was going to have to battle at any second.

Did the woman actually look for danger? Or did she just have a rare talent for stumbling across it? Mumbling a low curse, he flipped the hinged portion of counter out of his way and stalked after her.

“What are you doing here?” Kol stared down at the female now shoved into the corner booth. Two huge blue eyes snapping with annoyance stared back at him.

“You turning down customers?” Kelly Shane, a witch who had already managed once before to get herself kidnapped and traded for passage through the portal housed in his bar, pulled the ridiculous hat she wore off her head, plopped it down on the table in front of her, then smiled up at him.

“Go home.” He slid his gaze to the table full of garm, wolf-shape-shifters like himself, only one space over.

“I’ll take a beer. Thanks for asking.” Kelly pushed her hand into the pocket of her coat and pulled out a wad of bills.

Annoyance prickling the back of his neck, he leaned over, placed his hand on top of the money and shoved it back toward her. “Don’t you learn?” he asked.

“Learn what?” she replied, her face full of faux innocence.

Something tightened deep inside Kol—just like it always did when Kelly was around. He tried to convince himself it was irritation at her steadfast refusal to let go of what she saw as a wrong done to her. A few months earlier he had allowed the natural order of the portal to rule; he had done his duty as the portal guardian. Portal guardians maintained balance. That was all. They did not interfere with trade or transport—as long as fees and tolls were paid. He’d tried to talk the obstinate witch out of offering herself as such a toll, but she was determined to follow her friend who had been captured earlier. Thanks to her twin sister, also a witch, and a hellhound, she’d come out of the ordeal relatively unscathed. Her friend hadn’t been so lucky.

Kelly’s hand jerked under his. His gaze shifted to her face. Her brow furrowed, she tried to free her hand again.

She was an irritating little bundle of prickles, but something about her brought out every protective urge Kol possessed.

Low rumbles sounded from the booth next to them. Kol muttered a curse. The natives, or in this case, invaders, were getting restless. Time was running short.

Without pausing to analyze why he cared about her safety, or giving her time to argue, he scooped the little witch and her hat into his arms and strode to the door. She weighed little more than a breeze.

But her recoil was wicked.

Her thumbs pressed instantly into his trachea, a move that would have cut off the air supply of a mundane. Kol just blinked down at her. “You’re leaving.”

She blinked back, frustration warring with uncertainty in her eyes. She pulled her lip between even teeth. “I’m not.”

In other circumstances, if he hadn’t been in such a hurry to get her out of danger, Kol would have laughed at the statement. She hung dangling five feet off the ground cradled in his arms. She wasn’t in much of a position to argue.

Then he saw it; her hand moved to her pocket. Growling deep in his throat, he shimmered, rematerializing outside the bar with Kelly still nestled against his chest.

Barely giving her time to emit a squeak of surprise, he dumped her onto the wet pavement. “Don’t try your magic on me, witch,” he warned her, then with a grin at her irritated grumph, strode back into the bar.

He waited, his back to the door, his gaze flowing over the bar patrons, watching for a sign of the attack that he knew was imminent. Since the hellhound and Kelly’s sister rescued Kelly, there had been one challenge after another. Coincidence, or somehow related to those past events, Kol didn’t know, and at this moment didn’t care.

His back pressed against the door, he closed his eyes for a brief second. She was still out there. Disconcerting though it was, he could feel her. Up close, her heartbeats and breaths had tangled with his own. But even with her on the other side of the door there was an awareness, something he had never experienced with any other being, and didn’t want to experience now. He let out a loud breath. He didn’t need this. A muscle ticked in the side of his face. He waited a few more seconds, until the awareness lessened.

She had moved further away. Probably thought she was hidden.

Hidden enough the garm he was about to confront wouldn’t spot her when Kol tossed them out on their asses?

He pulled open the door a few inches letting cool, damp air spill into the smoky space and stared out into the darkness.

He couldn’t see her, but even without his senses telling him she was still lurking somewhere nearby, he’d have known she was waiting. Kelly Shane wouldn’t leave so quickly, wouldn’t give up that easily. He might be able to run her off, but he couldn’t leave the bar unguarded–not right now. His fingers tightened around the worn wood of the door and his gaze probed the darkness one last time.

Tensing his jaw, he turned back to the bar. The door slipped closed behind him with a whisper. His irritation with the bewitching shadow who skulked out in the gloomy night still gnawing at him, his dark gaze drifted across the customers and toward the four men seated in the back. They’d arrived not long before Kelly, reeking of arrogance and garm, wolves, but without a portal or world of their own to guard.

Challengers. They didn’t even bother to hide it.

Kol sighed. This was getting monotonous.

Deciding he didn’t have the patience or time to wait for their attack, he huffed out a breath, grabbed the baseball-bat-sized piece of silver-coated iron he kept stashed behind the bar and strode to the back of the room, his heels making a sharp rapping noise against the wood floor.

He wasn’t interested in stealth. Let them know he was coming, and he was pissed.

“If you like shape shifters, witches, dwarfs, elves, and everything else supernatural, you will love Guardian’s Keep. It is a fast-paced story filled with suspense, intrigue, and passion. Kol and Kelly are both strong characters with powerful abilities, intense feelings for one another, and determined devotion to their beliefs. Lori Devoti weaves a truly unique tale of conspiracy, deception, and powerful emotions. Her attention to detail and skillful descriptive writing makes this sexy adventure a fantastic read. It will keep you on the edge of your seat until the very end with its surprising twists and turns. She has written an exceptional story that should definitely be placed in the winner’s circle. I am eagerly looking forward to reading more books from this author. Congratulations Ms. Devoti on penning an outstandingly exciting romantic fantasy.” —Kara T., Fallen Angel Reviews, 5 Angels

“(…) Guardian’s Keep is yet another hit from Lori Devoti! She carefully balances the paranormal elements with a strong romance to create a story that is practically impossible to put down. Highly recommended!” —Debbie, CK2S Kwips and Kritiques, 5 Clovers

“This exciting romantic fantasy sequel will hook the audience from the onset as Lori Devoti enthralls her devoted fans with a terrific thriller. The action never slows down once the portal is breeched whereas the relationship between the guardian and the witch is enchanting as both know it is wrong. Although this can be read as a solo, perusing Unbound first enhances this experience as the whole is greater than the sum of the wonderful twin parts.” —Harriet Klausner, Alternative Worlds

“Guardian’s Keep is a very steamy and mysterious paranormal romance. Readers will get caught up in the story as Kelly and Kol try to unravel a dangerous plot put in motion by a desperate woman. The unusual characters, steamy and mysterious action and imaginative plot will keep readers intrigued right up to the end of the story. Guardian’s Keep is a must read for those who love paranormal romances.” —Dottie, Romance Junkies