Q.) First can you tell us about Red-Headed Stepchild?

J.W.) Red-Headed Stepchild is the first book in a series about a half-vampire, half-mage assassin named Sabina Kane. In the first book, Sabina is sent on a mission to assassinate a rival vampire who’s threatening the Dominae, Sabina’s bosses. The mission reveals secrets about the Dominae’s activities that threaten all the dark races. In addition, facts come to light about Sabina’s past that will change the course of her life forever.

What about your take on vampires, do you stick with tradition or tweak it a bit?

J.W.) Major tweakage. I decided to keep the blood lust and the immortality. The rest I punted out the window. My vamps are not made or undead. They’re a race create by Lilith through a liaison with Cain Their biggest weakness is apples. It sounds strange, but there’s a whole Garden of Eden connection. Plus, all vampires have red hair, which they inherited from Cain.

Q.) Which group would you want to be a member of vampire or mage?

J.W.) That’s a great question.I’ll go with mages. Vamps are immortal, but mages live extremely long lives due to their ability to use magic to repair damage. Plus mages have the advantage of being able to attack from a distance. I think it’d be fun to zap people.

Q.) Why vampires? Didn’t people tell you they had been done?

J.W.) They’d been done, but not by me. I’m not sure why I’m drawn to them. My mom says it started early with a fascination for the Count on Sesame Street, so it obviously started at an early age. I write about them now because they’re such rich sources for metaphor and symbolism. Plus, it’s fun to write about creatures that are strong and immortal. My favorite thing is to put a character like that in an embarrassing situation and watch them squirm.

J.W.) Depends on which kind we’re talking here. If it’s the undead, creepy kind then bring on the stake. If they’re the misunderstood hunky hero type then sign me up.

Q.) Ultimate fighting challenge, you have a choice of a vampire, a werewolf or a mage as an opponent. Who do you choose?

J.W.) I think I’d prefer to fight a werewolf. They’re easily distracted by meat products. Just toss a rump roast at them and run like hell.

Q.) Are you a plotter or a pantser? Character-driven or plot driven? Ever try to be the opposite? Do you have a set method you use when starting a book?

J.W.) I’m a plantster. I plot some beforehand but leave lots of room for spontenaity. After the first draft is done, I disect the plot extensively before I tackle rewrites. To me character and plot aren’t mutually exclusive. They feed off each other.

When I start a book I spend a lot of time trying to figure out the world.This involves alot of research and brainstorming. I kew a few things about Sabina before I started writing Red-Headed Stepchild, but until I understood her world I couldn’t tell her story. Once I have a grasp on the world-building, I write several drafts of the first scene until I find the right starting point. Once I have that everything falls into place.

J.W.) The smartest thing I did was start a blog. Back when I was just starting to write with the intent to publish, it served as my testing grounds. It helped me find my voice. And now that I have a contract, it helps me network and get the word out about my work. I don’t think blogging is for everyone, but it can be helpful if you’re willing to put in the effort.

I’ve made mistakes, but I can’t say I wish I’d do anything differently. Instead, I wish I’d trusted myself more. It would have saved me a lot of stress.

Q.) Can you describe three things you keep in your writing area that tell us something about you? 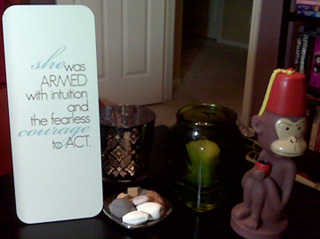 -This sign inspires me. It says, “She was armed with intuition and the fearless courage to act.” It’s especially helpful when I’m mired down in the story and start to lose faith.
-A friend gave me the bobble head monkey. I love his fez. His name is Jasper. All this says about me is I like monkeys wearing fezes.
-Candles. One of these is a sandalwood scent, which plays an important role in my books. They’re also pretty, which makes me happy.

Q.) Any new projects on the horizon? What would you like to try next? And where can readers find you on the web?

J.W.) I just finished book two of Sabina’s series, The Mage in Black . Now it’s on to the third book, tentatively titled Green-Eyed Demon. After that, I have a few ideas simmering. I’m sticking with urban fantasy for a while though. It’s so fun to write. Readers can find me at www.jayewells.com