30 Days of Vampires, As Irish as the Vampire?

30 Days of Vampires Schedule
Originally written for Universal Studios HorrorOnline (published March 2000), it was a lot of fun to “prove” vampires had Irish origins. Like a great deal of other now dated dark material, you can find the original at the no-longer-active DarkEcho.com Web site – Paula Guran

* * *
The vampire is the most Irish of modern monsters, a true creature of the Ould Sod.

Many a dread beastie found its beginnings in the somber valleys and melancholy mountains of Eire. Ancient Celtic legends and customs mixed first with Roman mythology and then with Christianity to beget a rich potion of dark lore. Some of this commingling of cultures can be found in the most horrific of our present-day holidays — Halloween. Many of the traditions first popularized in the U.S. by Irish immigrants in the 19th century have origins in the Celtic holiday of Samhain. The mortal and spirit worlds were said to merge during this festival marking the end of summer and the beginning of winter. Folks protected themselves from evil spirits by adopting disguises as ghosts and goblins. To show proper respect, they offered food to the dead who returned home for Sahmain. The Christian holidays of All Saints (All Hallows) Day and All Souls Day (November 1 and November 2) became replacements for the pagan holidays with celebration beginning on the evening of October 31 — All Hallows Eve or Hallow Eden. 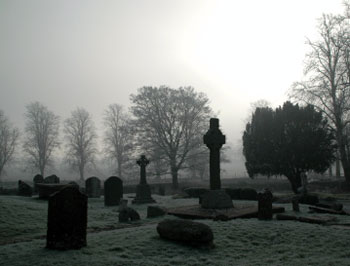 Not that St. Patrick himself had such an easy time bringing Christianity to-or inflicting it upon-Ireland. (Most of the tales that survive, of course, cast Paddy and his holy side as the good guys with the Celtic druids portrayed as demonic bad guys.) Many were the magical fights between the future saint and the Celtic druids. In one match-up, the druids’ incantations covered a hill and surrounding plain with a cloud of Stygian darkness. Patrick’s prayers brought the sunshine back. His prayers also curtailed the Arch-Druid Lochru’s power of flight and the druid was dashed to pieces upon a rock.

Brought into the bosom of the church just in time for the Dark Ages, the Irish peasants survived invasion, rival kings, unfortunate weather, and other indignities until finally left to fend for themselves in an existence dominated by a corrupt church, oppressive landlords, complicated politics, and an absentee government. Little wonder that belief in strange unseen powers seemed the best way understand the workings of the world. Much of what might be explained rationally in other cultures was attributed to the power of the fantastic in Ireland and became fodder for generations of storytellers.

In some cultures supernatural beings don’t get much weirder than the run-of-the mill phantoms, giants, witches, ghosts, shapechangers, and the like. Eire has all of those, of course, but Ireland bred a raft of particularly interesting dark forces. Among the Irish sidhe (fairies), you’ll find the banshee, for instance, a female death messenger who does no harm herself, but her unearthly ‘keening’ (the English word ‘keen’ is from the Irish ‘caoineadh’ meaning lament) signifies the death of a member of the true Irish race. Her sister-force, the Lianhan Sidhe seeks the love of mortal men and their desire for her ultimately destroys them. The Far Darrig (“The Red Man”) is a near relation to the leprechaun, but he dresses in red from head to toe and, much amused by mortal terror, he’s been known to give evil dreams.

The female merrow (mulrruhgach) is a mermaid who attempts to attract fishermen and sailors, but her presence always ensures a storm or a disaster at sea. Far Dorocha (“The Dark Man”) rides on his black horse into our world to abduct humans the queen of the fairies desires. Although he never speaks mortals invariably understand his commands and, unable to disobey, surrender their wills to his and mount up behind him. The Gray Man or Far Liath appears as a fog and covers land and sea with his mantle. He obscures rocks so ships crash upon them and darkens the road so that travelers unwittingly stumble over cliffs to their deaths. The Dullahan (Gan Ceann) is a headless horseman who rides an equally headless horse during the dead of night; wherever he stops a mortal dies. The Demon Bride, a beautiful but evil spirit, seduces her mortal victim with a kiss that steals his soul. He dies the death of a raving lunatic, haunted by the knowledge of his fatal mistake.

Eire’s eerie atmosphere inspired many non-Irish writers as well. The tales of Lord Dunsany; Francis Marion Crawford’s “The Dead Smile,” (1899) — according to S.T. Joshi “one of the most grippingly terrifying tales ever written;” H.P. Lovecrafts’s “The Moon Bog” (1921); William Hope Hodgson’s HOUSE ON THE BORDERLAND; and more than a dozen of Ray Bradbury’s stories are just a few of the weird tales that evoke or are set in Ireland.

Aye, but I promised ye vampires, now didn’t I? And no, I didn’t mean the dearg-dur, Ireland’s rather lackluster native vampire that can be defeated by building a cairn of stones over its grave. I meant the very essence of what we think of as a vampire these days. The monster who has become a cultural phenomenon that is often portrayed as more desirable than malign.

As we mentioned above, Joseph Sheridan Le Fanu is noted for his ghost stories, but he is also remembered for his novella “Carmilla.” Published in 1872, it tells of a lonely English girl who meets a beautiful aristocratic vampiress in an isolated castle. But there’s as much of the banshee and the lianhan sidhe (although with lesbian rather than heterosexual orientation) in “Carmilla” as there is eastern European vampiric influence. And, according to Richard Davenport-Hines in GOTHIC: FOUR HUNDRED YEARS OF EXCESS, HORROR, EVIL AND RUIN, “Carmilla” is also a political allegory; its setting somewhere in the Austro-Hugarian empire a substitute for 19th century Ireland. The English narrator, Laura, and her father live an isolated existence that parallels that of the Anglo-Irish gentry of the period. They live near “a ruined village” that resembles the results of Irish depopulation after the great famine of 1845-49. The extinct “proud family of Karnstein” is a parallel for the extinction of much of the Irish peerage after the Act of Union of 1800. After 1800, no new Irish peerage could be created without the extinction of three old ones, thus the aristocracy was “only able to regenerate by a sort of legalistic vampirism.” Carmilla, an undead member of the otherwise defunct Karnsteins, “[l]ike the Irish peerage…needs extinctions to revive.” The three young women who expire in the story equate with the “three Irish peerages required before a new one can come alive.”

“Carmilla” was certainly an influence (some go as far as to say a plagiarized source) of another Irish writer, Bram Stoker. Although not a social and political parable like “Carmilla,” the Irish folkloric and literary influences are definitely there. And, Stoker’s vampires, according to Davenport-Hines, can be seen as a metaphor for the assimilation of capital; the American character of Morris as symbolic of a future that is dominated by the new world, not the British Empire.

Hollywood eventually turned Stoker’s evil nobleman into a glamorous, debonair film image with Tod Browning’s suave count, portrayed in the 1931 movie by Bela Lugosi. Stoker, having served as Victorian theatrical luminary Sir Henry Irving’s “manager” for 27 years, knew something of the dramatic, but even he could not predict his creation’s dramatic impact. The book has been adapted over 100 times for the screen. Anne Rice, the writer most responsible for our current cultural interpretation of the vampire mythos, was inspired by the 1936 Universal sequel to DRACULA, DRACULA’S DAUGHTER (along with the book DRACULA, “Carmilla,” and other sources.) Rice’s maiden name was O’Brien. Her father is described by Rice biographer Katherine Ramsland as “a son of the Irish Channel” in New Orleans; her mother, Katherine Allen, “came from an old and respected Irish family.” As for her vampiric anti-hero Lestat , despite his aristocratic French antecedents, there’s something of the stereotypical Irishman about him-the irresistibly charming canny outsider; the compulsive sinner with an addictive thirst.

Not convinced, are ye? Well, no two people ever lit a fire without disagreeing. But come next St. Patrick’s day, if ye canna envision the vampire as more Irish than those pesky leprachauns, then at least pay a heed to all these Irish storytellers and their dark tales.

A reformed horror goddess, Paula Guran is now the editor of Juno Books (www.juno-books.com)-which has been known to publish fantasy featuring vampires.

← 30 Days of Romance, Confessions of a Twilight Mom 30 Days of Vampires...Sex, Blood, and Rock ‘n’ Roll – The Vampire’s Immortal Mystique and a Contest! →