30 Days of Romance, Confessions of a Twilight Mom 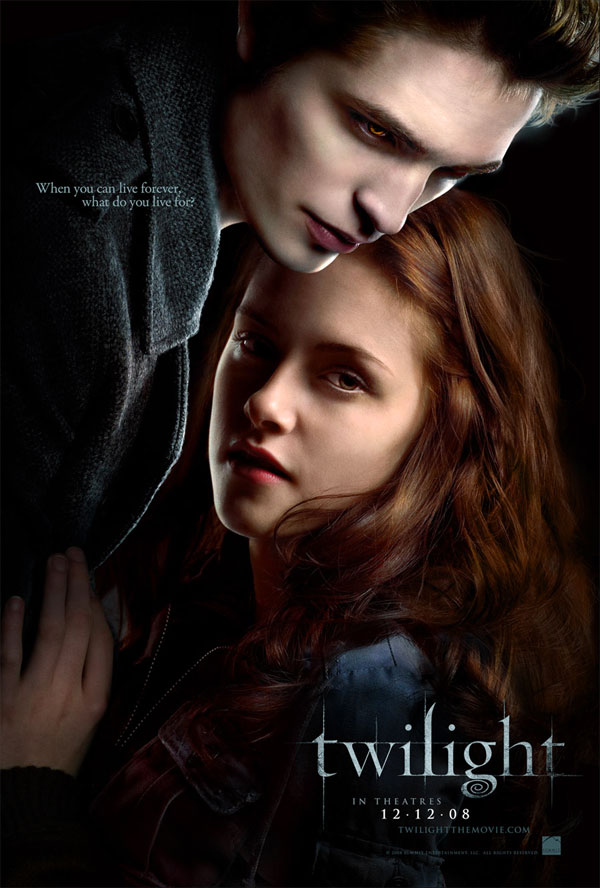 My name is Kristina, and I am a Twilight Mom. Yes, it’s true. I admit it. I hang out on the Twilight Moms message board, went to a Breaking Dawn midnight party, and stayed up all night reading it, the last book in the series (and yes, I was horribly disappointed—I would say it was easily the biggest literary disappointment of my life). I pre-ordered movie tickets for the Twilight movie weeks ago, and saw the first showing this morning (in a totally full theater, I might add!), release day.

But before I review the movie, let me go back to the very beginning of my Twilight obsession. I discovered the book the month it was released, as I was walking through a bookstore headed toward the romance section. I passed a shelf that, in retrospect, must’ve been in the YA section, and the cover immediately caught my eye. So I picked it up, turned it over, and read the back blurb—only three or four sentences, but enough to hook me. So I bought it. I started reading it that night, and ended up staying up half the night finishing it.

I feel personally responsible for starting some of the word-of-mouth buzz, because I told everyone I knew that they had to read it, even if they didn’t read YA books, even if they didn’t normally like vampire books. I got my friends hooked, my family hooked, and this was all before it became the international sensation that it is now.

So…the movie. Suffice it to say that I’ve been eagerly awaiting it for a long, long time. There’s just nothing better than seeing a favorite book turned into an excellent film, the familiar characters brought to life in full Technicolor glory. But then again, there’s nothing worse than seeing a favorite book turned into a horrible film, one that makes you wince to watch it.

For me, the Twilight movie fell somewhere in between. First, the pros: the locations were gorgeous. Stephenie Meyer did well in choosing to set the book in the Pacific Northwest, because the scenery was simply stunning, and, for the most part, looked exactly as I envisioned it. I thought the casting was mostly great, too. Kristen Stewart simply was Bella, exactly as I imagined her in my mind. I thought she captured the character perfectly. I also thought Rob Pattinson did an amazing job. His Edward was the perfect mix of confidence and self-loathing, and frankly he’s just so stunning that I found it hard not to gape when he was onscreen. Billy Burke, playing Bella’s dad Charlie, was also perfectly cast.

For the most part, I enjoyed the Forks High teenagers, all well-cast and well-acted, and the same with the Cullen clan, but particularly Rosalie, Emmett, and Esme (Jasper was the weak link, in my opinion—he actually got some laughs from the audience when they probably weren’t supposed to be laughing). As to the bad vampires, I thought Victoria was perfect, Laurent was satisfactory, but James was too over-the-top and cheesy.

I also thought they did a really good job of staying mostly true to the book, although they took some liberties condensing some scenes and changing when and where some conversations took place. But mostly it did feel as if the book had come to life.

Now the cons: the make up was horrible. I mean, c’mon, we know they’re vampires—just a little bit of pale face powder would have sufficed, rather than the shovelful of white pancake makeup it looked like the Cullens were wearing. Rob Pattinson is gorgeous enough on his own—the eyeliner and lipstick just looked overdone and silly. The makeup looked particularly bad on Peter Facinelli, playing Dr. Carlisle Cullen. Also, there were a couple of close-ups of the vampires’ eyes, particularly Edward’s, where I could clearly see the contact lens on his eye.Seems like a little editing work could have removed the tell-tale ring. And the wig on the actor playing Jacob Black looked ridiculous—I wish they’d spent a little more money on it.

Also bad were the special effects. I realize this was an independent film, fairly low-budget, and you can only do so much, effects-wise, without a big budget. After all, we as an audience are spoiled, effects-wise, in a post-WETA, post-“Lord of the Rings” world. But the effects were definitely hokey and cheesy. And the meadow scene….well, I won’t spoil it for you, but just let me say that I was disappointed. Really disappointed. I now wish that vampires didn’t sparkle.

Lastly, there was a little more angst than there was in the book. I remember some funny, light moments between Bella and Edward in the book, some playfulness. But in the movie, it was all angst, all the time. For someone who hasn’t read the books, you might come away wondering how the pair goes from first meet to “You are my life now,” because they don’t quite get to see the development of their relationship in the movie (of course, some critics of the book will say that there isn’t much of that in the book, either, but I respectfully disagree).

All in all, I enjoyed it. I’d probably give it a B, maybe a B+, though the plus mainly comes from my enjoyment of the original source material rather than the movie itself, and because it was pretty pleasant just to stare at Rob Pattinson on the big screen for two hours, bad makeup and all. I saw it with a friend, though—also a fan of the books (minus the train wreck that was Breaking Dawn, of course)—and she didn’t like it as much as I did. Her biggest criticism was wooden acting, and, and like me, she was really put off by the bad makeup and special effects.

So…anyone else see the movie already? If so, how would you grade it?