30 Days of Vampires….TWILIGHT and Vamps in YA.

By Kerensa Wilson, I Want My YA

Twilight, all I have to do is mention the title amongst a group of people and each of them is ready to gush about their favorite novel. With the movie releasing today ( and you can bet I have my tickets already) I?ve been asking myself what is it about Stephenie Meyer?s Twilight that makes it such beloved story for so many. It would be easy for me to say everything. I love the writing, the characters, the setting, the plot, the action, and most importantly the romance.

But, if you pressed me to pick just one thing that made Twilight a novel that I?ll talk about for years to come, it was that Bella?s character captured everything it was for me to be a teenager and in love. It was easy to transport myself alongside Bella while she fell head over heels for Edward. Granted my first love wasn?t a vampire but I could understand how much Bella loved Edward and that nothing, not even her safety mattered as much as her being with him. Before I knew it I was rooting for team Bella and Edward, I wanted to see true love win out over all obstacles. I?ll even admit that I wanted her to be a vampire and spend the rest of eternity happy and in love. Ok I know I?m something of a romanticist but there was something about Bella?s story and remembering what it was like to be her that had me believing the love she shared with Edward could conquer the sizeable challenges in front of them. Alright I?ll just say it, Bella made a believer out of me.

Of course it wasn?t just her ability to love Edward so completely that made Bella real to me. It was her courage, humor, strength of character that made her such an easy heroine to cheer for and identify with. No matter how much I fell a little in love with the characters in the book Bella will always be my favorite and the reason Twilight has held so much meaning for me.

What about you? Did you find something of yourself in Bella? I?d love to hear what made Twilight special to you and if you?re going to the movie tonight.

By Heather M. Riley, I Want My YA

I’m apparently one of the few remaining people who have yet to read Stephenie Meyer’s Twilight. The saddest thing about that, is that I own the Advanced Reader’s Copy of Twilight. I truly do plan on reading the entire saga, but given the hundreds of books I own I just haven’t gotten there yet. As a bookseller, I can certainly speak to the popularity of the books. Breaking Dawn has only been out for just over three months, yet my store alone has sold over a thousand copies. I can also tell that thanks to Stephenie Meyer, people want vampires. Sure the vamps have always been popular, but Stephenie Meyer’s books have brought even more fans to the vampire scene. People who never thought they’d read about vampires, both Young Adults and the Not-So-Young Adults, are now craving even more vampire fiction to slake their thirst.

Here’s a few books that I like to recommend to those of you who can’t get enough of vampires. 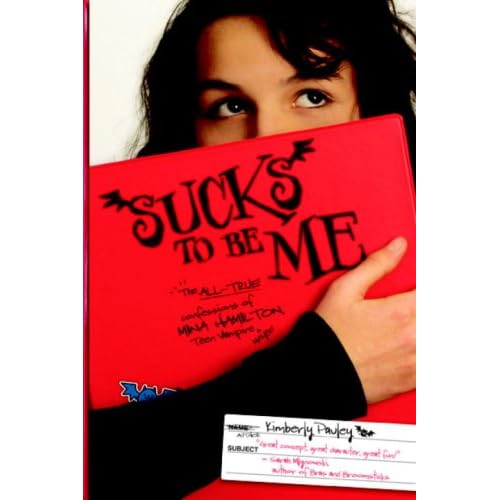 Sucks to Be Me by Kimberly Pauley

Mina Hamilton is the very human child of two vampire parents. She’s always known her parents were blood-sucking freaks, but hey they’re her parents. Problems arise when the vampire council finds out about her. Humans are not supposed to know about vampires, even if those vampires are her parents. Because of her knowledge, Mina has to make a choice: remain human or become a vampire. She now has to attend special vampire classes to help her make her decision, but can Mina really make such a life-altering choice at only 16?

This book is just plain fun, and I really can’t wait to see more of Mina.

In Eighth Grade Bites we meet 13-year-old Vladimir Tod, an average teenager, except for the fangs. The child of a vampire father and human mother, Vlad has plenty of secrets. Only his best friend and his Aunt know what he really is. Vlad’s parents were killed years before in a fire and now Vlad wants answers. On top of everything else going on in his life, Vlad also fears there’s another vampire in town.

Ninth Grade Slays brings us a slightly older and more experienced Vlad. He’s learning to better control his vampiric abilities. Vlad is also experiencing his first year of high school, which brings its own set of challenges, including a growing distance between Vlad and his best friend Henry. If high school wasn’t bad enough, one of Vlad’s greatest fears has come to pass: a vampire hunter has come to town.

I’ve fallen hard for Vlad and I can’t get enough of these books. Tenth Grade Bleeds comes out sometime next spring and I can’t wait. If you want to learn more about Vlad and Heather Brewer be sure to stop by Want My YA today. Heather Brewer is guest blogging in honor of Vlad’s birthday. Check it out and be sure to leave a comment for Heather.

Check out I Want My Ya at:
http://www.wantmyya.blogspot.com

← 30 Days of Vampires, Vampires Across the Genre 30 Days of Romance, Confessions of a Twilight Mom →