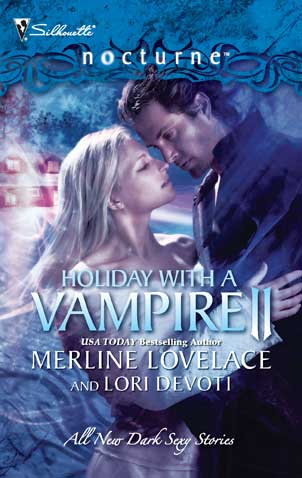 Here’s an insider look at the great vampire books coming from Harlequin this season:

Halloween isn’t the only holiday vampires celebrate! Vamps collide with Christmas in this anthology from Silhouette Nocturne. In “The Vampire Who Stole Christmas” by Lori Devoti, a vampire tries to prevent a beautiful daemon from marrying the wrong man. And in Merline Lovelace’s “A Christmas Kiss”, a sexy vampire (who’s a little woozy after a little emergency fang dentistry) is rescued on Christmas Eve by a very cynical – but also very hot – cop.

The hero of this novella, Javed, is half-vampire, half-demon. Created as an experiment, he’s the only hybrid to possess both species’ powers…and none of their weaknesses. The heroine is an Eradictor, trained from childhood to kill demons like Javed. So will she kill him…or fall for him?

The Devil To Pay by Michele Hauf (Silhouette Nocturne, January 2009)

Ivan Drake has been cursed since birth because his parents sold his soul to the Devil – but that’s just the start of his connection to the paranormal… By day, he tries to stop the escalating war between the witches and vampires, but by night he is forced to be the Devil’s bounty hunter. You’ll have to read the book to find out part-vampire Ivan and his witch lover can to overcome all these obstacles before they can find happiness!

A new installment of Caridad Piñeiro’s “The Calling” series. This time, hardened FBI agent Jesus Hernandez is being introduced to the world of vampires…with the help of sexy vampire hunter Michaela.

The hot cowboys of Skull Creek, Texas have a secret…they’re also vampires! This eBook exclusive bundle contains three books from Kimberly Raye’s Love at First Bite series (Dead Sexy, Drop Dead Gorgeous, and A Body to Die For), with a bonus novella “Once Upon a Bite” (also in the Blazing Bedtime Stories anthology).

To learn more about the paranormal romances from Harlequin, visit www.paranormalromanceblog.com!