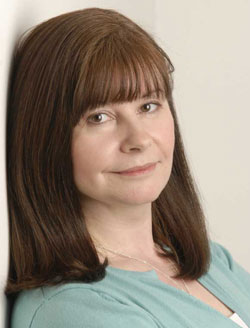 Suzanne Mcleod is the author of the Spellcrackers.com Urban Fantasy series. She lives in the UK with her husband and two rescue dogs and they all share their garden with a colony of pipistrelle bats.

Mega thanks to Lori for inviting me to guest blog in her 30 days of Vampires. I’m delighted to be here.

One of the questions I’m always asked when I say I write about vampires, is ‘Why vampires?’ And strangely enough, if I were to go back to before I started writing; I’d have probably asked myself the same question! Of course, that was before I got all intimate with those of the fanged-persuasion and fell totally under their spell! LOL! My fascination with vampires [and other not so human characters] stems from my life-long love affair with books. Like any bookworm, I’ll read anything, but my heart lies with romances, and in particular with those romances that add a dash of something else; mystery, crime, humour, historical, fantasy, you name it! And in the last few years [like a lot of other readers] I love it when a hot, sexy, dangerous vampire or three start stalking the heroine and have me ripping through the pages desperate to get to the sharp end of the story. So when I started writing, vampires just had to be top of my character wish-list.

And it’s not only the ‘bad-boy’ image of the vamps that appeals to me; one of the more interesting and fun aspects is how every author has their own take on the vampire myth and weaves it into their worlds; Kim Harrison with her genetically-altered tomato which leads to the vamps emerging from the shadows, Charlaine Harris and the invention of synthetic blood allowing vampires to declare themselves real and teetotal, or maybe humantotal! Then my own vampires – who although they’ve never been a secret from society, haven’t always been accepted by the humans – cleaned up their image with a no-expense spared, public relations campaign [along with some judicious government legislation] and transformed themselves into sought after A-list celebrities. But they still have their darker more dangerous side as Genny Taylor, my main character knows only too well.

In my first book – The Sweet Scent of Blood – Genny, a sidhe fae, is forced into helping one of those hot celebrity pin-up vamps when he is accused of murdering his girlfriend; risking both her job and the witches’ protection it offers – and threatening to expose her own dark secrets. Searching for the killer plunges Genny deep into the hidden heart of vampire society. It’s not long before she realizes that she and Mr October – the accused – are both unwitting pawns in a centuries-old power struggle between London’s non-human communities … and it’s not just her own neck that’s at stake, but the lives of all London’s supernaturals.

The Sweet Scent of Blood is set in a contemporary London – one with an alternate history – It’s a city where you can party the night away in Leicester Square with a celebrity vampire, ride the Underground with a goblin worker, buy a love charm from a Witch in Covent Garden, report a crime to a mountain troll at Old Scotland Yard or hire a sidhe or a satyr at Spellcrackers.com to sort out that annoying pixie infestation. But like all cities, magical London has its less salubrious side, and Sucker Town is one of the darkest with its blood-pubs and Beater goblins who patrol the streets and keep them safe after sunset, but even they can’t always stop the fang-gangs from taking a bite out of you…

Here’s an extract from chapter 4; this is where Genny first meets one of the vampires who play a big part in the book.

‘Your website picture does you an injustice,’ the vampire said. ‘You are so much more in the flesh and . . . blood.’

‘Sorry I can’t return the sentiment,’ I said.

He gently shook his head. ‘Tut tut, Genevieve.’ He took a step towards me. ‘You really don’t mean that. Not when I have been waiting especially for you.’

I hardened my voice. ‘Then you’ve wasted your time. My visit’s with the police, not you.’

The Vampire took another step, fast, calculated to spook me. I swallowed hard, but held my ground. He stopped within touching distance. Long slim fingers brushed a lock of hair from his forehead while he studied me. ‘Intriguing.’ Half-closed eyes gave him a sleepy, enigmatic look. ‘Why would you involve yourself in something not your affair?’

‘It’s really none of your business.’

‘But that’s where you’re wrong, Genevieve.’ The words drifted lazy and sweet through the air. ‘You see, this really is my business. I am tasked with bringing this little episode to a satisfactory conclusion for all concerned. I will do better without your . . . help.’

When what he had said sank in, rather than the dream of his voice, surprise tumbled through me, banishing the feeling of languor that had seeped into my bones. ‘Who says your conclusion would be satisfactory for everyone?’

He grinned, letting me glimpse fang, a push of mesma inviting me to go along with the joke. ‘Why, I do, of course.’

‘Uh-huh.’ I nodded slowly. ‘Sounds good.’ I gave him a smile. A wide happy beam of a smile.
Satisfaction lit his face, but before he could speak, I dropped the smile. ‘Only it doesn’t sound quite good enough.’ I winked. ‘But hey. Nice try.’

He laughed, and the sound bubbled through me like champagne. I shivered even as sweat trickled down my spine. I gripped the strap of my bag with both hands, holding it like a life-line, concentrating on keeping him out of my mind. The longer he talked, the more the back of my neck throbbed, reminding me I was more vulnerable than usual.

‘Genevieve.’ He shrugged an elegant shoulder. ‘What are we to do now?’

I stared at him, surprised. ‘You’re asking me?’

He indicated the police station. ‘Once you walk through that door, you make yourself defenceless.’
For a moment part of me actually felt he cared. I bit the inside of my mouth, hard, to banish the feeling.

‘You dispense with all that wonderful witch protection you have carefully cultivated.’ He spread his hands wide. ‘You are fair game.’

‘Tell me something I don’t know.’

‘Are you so eager to offer your blood?’

‘What do you think?’

‘Such bravado.’ He glanced at the door again, a vague anxiety in the action. ‘But even your sidhe magic will not shield you from some amongst us.’

‘Are you done yet? Because so far I’m not hearing anything new.’

He sighed, the sound coating me with remorse. ‘Go home, Genevieve, while you still can.’

‘What? Just leave?’ I stopped strangling the strap of my bag and clenched my fists, digging my nails into my palms, determined to resist the impulse he’d given me to go home. ‘When you haven’t even threatened me yet?’

Something dark and sad appeared in his eyes, then it was gone, hidden by the same enigmatic look as before.

I froze, pulse speeding up, unable to move or speak, gazing into his eyes. A voice screamed in my mind, yelling at me to break his mesma, but another part of me wanted, desperately needed, whatever he was offering.

Cool fingers circled my left wrist and lifted my still clenched fist between us. My hand moved, seemingly of its own violation, opening like a flower before the sun. Blood welled in the half-moon marks across my palm, bright against my skin.

‘May I?’ His eyes echoed the silken seduction in his voice.

My lips parted in a sigh as my head bowed in submission.

Anger flashed across his face and his fingers squeezed, the bones in my wrist grating with the pain. ‘Say. It.’

For an instant his pupils glowed red and my heart fluttered with sudden terror, then he dipped his head. I gazed at the line of his jaw, the long dark lashes, the sleek silk of his hair where it curled round the intricate whorl of his ear, its lobe pierced through, a single gem black against his pale skin. His lips caressed my palm, a shudder rippled through his body and I felt an answering shimmer resonate through my own. My eyes closed as he licked hot lines along my hand. Sharp fangs scraped my wrist and chill air kissed my bare skin.

Leaves rustled in the stillness and a horse whinnied from the nearby stables, startling me out of my reverie.

I opened my eyes to an empty street.

The vampire was gone.

I stared down at my palm. The cuts from my nails had disappeared, healed over as though they’d never been. A bracelet of bruises around my wrist was the only evidence of his presence.
‘Genevieve.’ My name whispered through the breeze.