30 Days of Vampires, The Vampire as Alien & Prize! 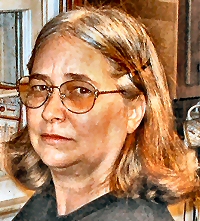 Margaret is also giving away a PDF of SEALED IN BLOOD, one of the vampire novels in her “Vanishing Breed” universe. Contest open until Midnight, December 11, 2008. Leave a comment on this post to be entered.

I’ve been a lifelong fan of “good guy” vampires, even back when they were almost impossible to find except in a few short stories. The classic vampire, a supernatural undead creature, was traditionally assumed to be animated by the Devil and therefore intrinsically evil.

Personally, I always disliked the premise that a character instantly lost individual personality and free will upon transformation into one of the undead. This assumption was gradually subverted in the 1960s and 70s by supernatural vampires who struggled against their curse (e.g., Barnabas in DARK SHADOWS) or weren’t diabolical to begin with (e.g., Chelsea Quinn Yarbro’s Count Saint-Germain). For an especially fruitful approach to the ethical vampire, however, consider him or her as a member of another humanoid species.

If this creature has evolved as a part of nature, he or she can’t be innately evil, any more than a human character would be. The natural, morally neutral vampire can make ethical choices on the same basis as any other sapient being. Vampires as “aliens,” in the sense of another20 species, whether terrestrial or extraterrestrial, have existed in fiction throughout the twentieth century and even a bit earlier. (I discuss a plethora of them in my book DIFFERENT BLOOD: THE VAMPIRE AS ALIEN from Amber Quill Press, www.amberquill.com.) My first book, an anthology called CURSE OF THE UNDEAD (1970), included a vampire-as-extraterrestrial story written by my husband, “Vanishing Breed,” on which my vampire series was ultimately based. Novel-length examples of the subgenre, however, began to flourish after the late 1970s.

Suzy McKee Charnas’s award-winning THE VAMPIRE TAPESTRY, starring solitary predator Weyland, sole survivor of his kind, stands forth as the classic portrayal of a vampire as a product of evolution existing at the top of the food chain. Whitley Strieber’s THE HUNGER portrays a female vampire in a similar position of isolation. Elaine Bergstrom (SHATTERED GLASS and its companion novels) and George R. R. Martin (FEVRE DREAM) present communities of alternate-species vampires.

Extraterrestrial vampires live secretly among us in Jacqueline Lichtenberg’s THOSE OF MY BLOOD. Shortly before her death, science fiction writer Octavia Butler published FLEDGLING, about an orphaned child from a race of vampires. Christine Feehan’s Carpathians, in her paranormal romance series, seek human soul mates. Susan Sizemore also features other-species vampires as romantic heroes in her “Primal” series. These examples represent only a few of20the many variations on the “natural vampire” motif.

The traditional vampire invites exploration of themes such as the boundaries between life and death, the loneliness of immortality, the erotic charge of sharing (or ravishing) lifeblood, and the ethics of feeding off other people. Critics frequently apply words such as “transgressive” and “liminal” to vampires, terms that take on different shading when the vampire is not a former human being with vestigial memories of a “normal” life, but something wholly Other. Fiction about naturally evolved vampires raises numerous additional issues. The allure and threat of the Other, for example, complicate sexual attraction when the Other literally belongs to a different species.

Inter-species relationships in vampire novels can function as metaphors for interracial relationships, and such vampires are often portrayed as victims of prejudice and persecution. Would an immortal predator desire a human mate, for that matter, and if so, why? Human characters relating to vampires have to face the same kinds of problems raised by any type of aliens who possess superhuman powers. Conversely, the issue of dealing with lesser animal species arises in this fiction except that in this case we are the lesser species. We are to vampires as other animals are to us. Weyland, Charnas’s solitary vampire, for example, regards human beings as prey or livestock, but over the course of the novel he has to acknowledge that the situation is a bit more complicated than that. Unlike (as far as we know) the animals we use for food, Weyland’s “livestock” have intelligence and self-awareness.

Does a vampire, as a superior being, have any moral duty toward us?

The predator among us also faces the difficulty of passing for human, a problem of varying degree depending on what limitations and vulnerabilities the author decides to impose on his or her vampire species. That this “alien” masquerades so thoroughly as one of us gives the vampire, for me, an appeal similar to that of Spock in STAR TREK, a being who provides a skewed perspective on human existence and whose allure includes an aloofness that can be overcome only by a very special mate. Like a traditional vampire, the alternate-species vampire who loves a human mate faces loss of the beloved to age and death. The natural vampire, however, usually can’t transform the beloved into one of his or her own kind (the tragedy of THE HUNGER arises from the vampire heroine’s inability to perform this transformation, despite repeated experiments). I find this situation interesting because the lovers remain Other and must continue to work at bridging their differences, rather than erasing those differences.

For the traits of my vampires in the “Vanishing Breed” series, beginning with DARK CHANGELING from Hard Shell Word Factory (www.hardshell.com), I had fun trying to explain as many standard vampiric characteristics as possible in more or less plausible biological terms that is, if one is willing to accept psi powers as at least borderline scientific. My vampires (like the classic nineteenth-century undead, including Count Dracula) can function in daylight, but they’re sensitive to the sun, which weakens them and causes discomfort. They get bulk nourishment from animal blood but also feed on emotions, so they have to drink from human prey regularly to remain healthy. While they can interbreed with human mates, hybridization doesn’t happen often, because female vampires go into heat infrequently, and a male vampire becomes fertile and capable of genital sex only in the presence of a female in heat. So their principal erotic outlet consists of feeding on human donors (or victims, depending on the individual vampire’s attitude). They have limited shapeshifting ability, but most of the powers they appear to possess along that line are illusions created by their psychic powers.

In that connection, they can hypnotize people what fun would it be if they couldn’t? Speaking pragmatically, I figured that ability would logically evolve because they can feed with minimal danger to themselves if the prey doesn’t fight back and even enjoys the experience (before forgetting it altogether in most cases). For the same reason, to minimize risk, a sensible vampire never kills his or her human prey. Most of them do consider us beneath them, food sources or at best pets. The vampire heroes of my novels, of course, fall into the category of exceptions to that attitude.

Find Margaret on the web at Carter’s Crypt, or subscribe to her newsletter at:
http://groups.yahoo.com/group/margaretlcartersnewsfromthecrypt