On a trip around the north of England I boldly suggest a drive to Whitby. I knew of this town because of Bram Stoker’s Dracula. It was on these shores that the Demeter crashed one dark and stormy night. The crew were either dead or missing. Silly as it may sound this was my sole reason for wanting to visit Whitby. This would give me bragging rights to my vampire aficionado acquaintances. 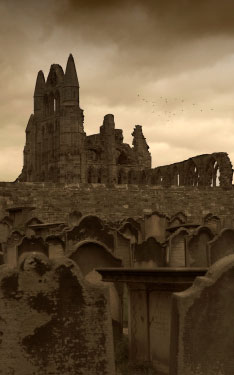 When we left York rain poured down making driving difficult at times. Fortunately my English friend was at the wheel. I never did get the hang of driving on the left. So while she drove I took out the guide book and read about Whitby. It shocked me that only one miner reference to Dracula was made. More importantly I discovered that “Whitby is one of the most interesting and attractive towns on the British coast. ” This has been true for many years. In fact Bram Stoker spent several week with his family here during the time he was writing Dracula. Originally Stoker had meant Dracula to enter England via Dover but he was so enchanted by Whitby that he changed his mind and set three chapters here.

In Chapter 6 of Dracula, MIna describes Whitby this way, ‘This is a lovely place. The little river, the Esk, runs through a deep valley, which broadens out as it comes near the harbour. A great viaduct runs across, with high piers, though the view seems somehow further away than it really is… The houses of the old town are all red-roofed, and seem piled up one over the other anyhow, like the pictures we see of Nuremberg. Tight over the town is the ruin of Whitby Abbey, which was sacked by the Danes, and which is the scene of part of ‘Marmion,’ where the girl was built up in the wall.” (The story goes that a young novice during the middle ages became pregnant A big no no of the time. As punishment she was bricked up in a wall while alive. I am going to assume this is a myth and not at all true.)

My friends and I enjoyed our outing in Whitby with its lovely shops, restaurants, and active harbor. Perhaps because of my reading of Dracula my eyes would drift up to the Abbey ruins high on the cliff. As beautiful as they were I could easily imagine them to be quite creepy, at night when the full moon gleamed and the wind howled, and perhaps a north sea storms passes through.

Mina writes of the scene where helpless witnesses watch as the Demeter comes perilously close to shore. The search light shines the way to safety but the hapless ship has no relief from the tossing waves, “The searchlight followed her, and a shudder ran through all who saw her, for lashed to the helm as a corpse, with drooping head, which swung horrible to and fro at each motion of the ship…. The ship, as if by a miracle, had found the harbour, unsteered save by the hand of a dead man!… The schooner paused not, but rushing across the harbour, pitched herself on the accumulation of sand and gravel washed by many tides and many storms… There was of course a considerable concussion as the vessel drove up on the sand heap… But, strangest of all the very instant the shore was touched, an immense dog sprang up on deck from below, as if shot up by the concussion, and running forward, jumped from the bow on the sand…”

Thus landed Count Dracula on England’s shores. It’s doubtful he took the time to enjoy the beauty of this seaside town. Of course, most establishments would probably closed so late at night, and Dracula had many other things on his mind. If you don’t know what those things are you must read the book. Even today, more than 100 years later, many people consider it the scariest book they have ever read. Why not do things right take a holiday in Whitby, sit near the ruins of the Abbey, or the nearby cemetery and read the book there.

Although much of the information in this article came from my own notes of my visit, and from Bram Stoker’s classic novel, I also found great ( and entertaining ) information in a book called Bram Stoker’s Notes for Dracula: A Facsimile Edition. Annotated and Transcribed by ROBERT EIGHTEEN-BISANG and ELIZABETH Miller (McFarland, 2008) Don’t let the academic title push you away. It is utterly fascinating!
Patricia Altner Oct. 30, 2008
Patricia’s Vampire Notes