Saturday was the Kat Von D signing at Barnes and Noble. I got there about a half an hour before the emails I’d received from both B&N and Booktour.com said it was going to start. And it was already a full house. Apparently, they started handing out wristbands–that’s right, wristbands!–at 9 a.m. And the signing actually started at 1:45. I’m guessing someone (wisely) advised them that starting at 3 just wasn’t going to cut it.

So, I grabbed my two books, paid, got my wristband and went with the other sheep to our assigned section of the store. Games, in case you wondered. We were divided into groups of 100. My group was third (wristband #316) and we stood there for over an hour. People were pleasant and overall fairly patient. Madison is good that way. You may get a bad egg, but we wait well. :)

Finally, when our time came it could have gotten dicey. They just herded all of us as one group to the line which meant because they lead us out from the front part of the section and people who got there first had moved to the back, that #399 was most likely first and #301 was most likely last. There were a few scramblers, but again overall we followed our directions like good little drones and no altercations ensued. 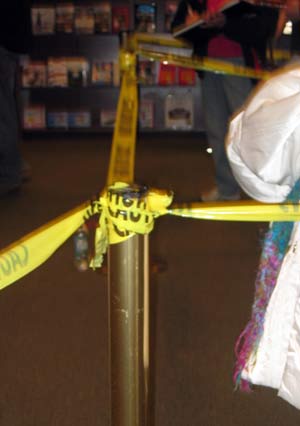 Then we were IN LINE. Uh, yeah, it went the entire length of the store, weaving once in that process, then up the stairs and weaving back and forth in the back of the store. There were “viewing areas” though, just like a Yellowstone where you pull over hoping to spot a bear. Photo opp places. :)

Lovely yellow crime tape was used to keep us from rushing poor Kat. Seemed to work, because again, after standing for an hour staring at that “Gnu” game we were pretty much book buying zombies. The living (for the most part) tattooed dead.

Once near the tape, the excitement started. There were those viewing areas–no pictures with Kat, no posing of Kat, but click away while she is in action. (With over 400 people in line can you imagine what it would have been like if people were allowed pictures with her?) If you wanted the book personalized you had to write it on a post it note. (again, very wise move) And Kat had an autograph book where you could write a note to her. (I thought that was really great too.) 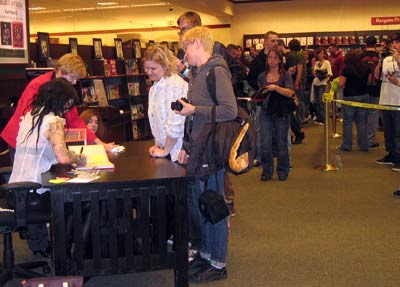 I bought two copies–both first editions with the nicer padded cover. One is for me, but the other I will be giving away closer to Amazon Ink’s release. Kat inspired the book a bit. The whole woman in a man’s world thing with tattoos was just perfect for my Amazons. Especially since in my Amazon world they believe the opposite–that women are the ones meant to do the tattooing, that men don’t have the spiritual balance to do one with real power. Her book has great images of various tattoos and some good information–especially if you are writing a book about a tattoo artist. :)

Look for that contest in a few months. I’m going to gather up some other fun book appropriate things and put together an Amazon world package.

And one last note, in case anyone wondered, Kat was lovely. Both in body and spirit. In fact if anything she was more beautiful in person than on the small screen. And the woman had been sitting there for how long, signing how many books? My hat is off to her for that alone.

← Interview with the artist: Amazon Ink artist, Timothy Lantz The Process...from manuscript to book from author's point of view →