Full Moon of Werewolves: Where wolf? There. & Prize!

Maria Lima is a writing geek with one foot in the real world and the other in the make-believe. One lucky commenter will win copies of Maria’s first two books. Just leave a comment on this post to be entered. Winner will be announced at end of Full Moon promotion. Last day to enter Saturday, April 25th at midnight central U.S. time. 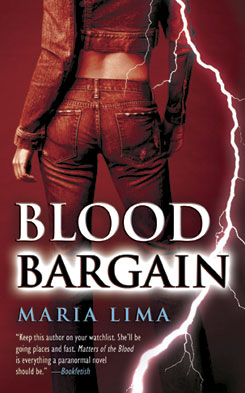 Despite their origins in horror and war, werewolves continue to hold a strong number two place in fictional supernatural beings (with our favorite bloodsuckers as number one). Okay, so zombies are on the rise (yes, yes, I know…) but if you scan most urban fantasy/paranormal romance novels, you’ll still find vampire and werewolves running neck and neck. (Egads, the puns!)

Seriously, though–why the wolf? What is so fascinating and fabulous about these furry predators that not only do we have centuries of legends about humans becoming them, so many fantasy novels either feature or include these lycanthropes?

It’s not like most U.S. writers have much personal knowledge of actual wolves outside of stories, TV or movies. They’re not easy to find in the lower 48; the grey wolf has been hunted nearly to extinction. The red wolf, once extinct, now have a small officially endangered population in the Southeast.*

Perhaps it’s because a full grown wolf is a sexy beast, reminiscent of man’s best friend, yet with a wildness and danger adding a hint of spice–although, in reality, a predator and maybe not so sexy. Could be that our collective unconscious is reminded of the many legends of the hypermasculine warriors, leading long-ago tribes into battle and translating that into a need for an alpha male (or in some cases, female). Or maybe, just maybe, there’s that part of us that knew that there was more to the story of Little Red Riding Hood than was on the surface–we internalized its sexuality, its underlying themes and wanted more.

Whatever the reason, wolves and their fantasy counterparts (whether wer, shapeshifter or skinwalker) definitely add a bit of je ne sais quoi to our reading. We love them. We love to hate them if they’re the bad guy or gal. We love to read about them, tell stories, make them part of our fantasy world.

Personally, I love the fascinating family structure in the wolf world.
The pack, with its extremely defined and complex make up thrills the social/cultural anthropologist in me. I adore watching people and thew way they interact and the way a wolf pack works is so very easy to translate into fiction; mimicking its strict hierarchies and morphing those into human/wer behavior totally flips my tortilla. 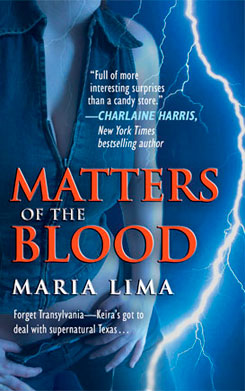 This is where it gets really fun: making my own world, adapting legend, myth, as well as historical, cultural and physiological facts into my version of what reality is. For those of us that write, isn’t that part of what makes it so damned sexy? Making up a fantasy world, especially one set in contemporary times, like my Blood Lines series, gives me the ability to build in my own rules and behaviors, making it work for me and and getting to create challenges for my characters.

For example, in my world, shapeshifters and werewolves are completely different–ahem–animals (pun totally intended). Shapeshifting is a magickal ability, inherited by certain members of the supernatural clan my protagonist belongs to. If you’re a shapeshifter, you can choose which animal to emulate, and, once changed–a process that is neither painful nor physically draining–you retain your humanlike qualities, including the ability to reason.

Wers, on the other hand, become the animal (their human sides are there, but suppressed) and are limited to one particular species (wolf, deer, etc.). I’ve even considered how to deal with skinwalkers, which, in their own way, work better for me as yet a third “animal”–something created by magickal means, via a spell, a potion, runes, something not inherent in someone’s nature.

So far, in the first three books, I’ve only dealt with shapeshifters, but in book 4, as yet untitled, I’ll be introducing a werewolf clan, with troubles and social rules all their own. Since I’ve just started to write it, who knows, maybe I can toss in a skinwalker or two…

I’m not sure if I’ll ever focus specifically on werewolves, but I can definitely promise that they’ll definitely have a fairly prominent place in this book.

If you’re looking for some reading choices (outside of the books of other guest authors here), here are some of my favorites:

Other recommended reading/watching in general:
A Companion to Wolves (Elizabeth Bear & Sarah Monette)
Brotherhood of the Wolf (an obscure but fascinating French film)
The Howling (cheese, but so tasty)