The belief in the transformation of humans into animals or animals into humans is as old as humanity itself. 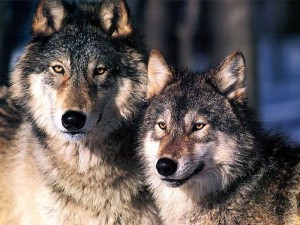 Stories have been told down through the centuries of men and women who could change into animals or of animals that could become human. Whether the characters of such stories were gifted or cursed, these tales have continued to fascinate until our present time.

In countries and cultures from around the world, stories of shape shifters have been at the heart of many myths, legends, folk and fairy tales. 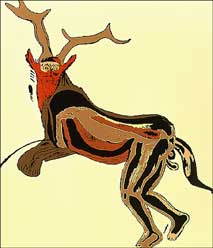 Deep in caves in France and southern Spain, paintings were discovered, which, it is believed, were created by tribes of Cro-Magnon men. One of these drawings is of a strange creature, which, although shaped like a man, has antlers like a stag and the tail of a wolf or wild horse. Speculations abound as to what the drawing represents. Most believe it is a shaman or holy man, using sympathetic magic to ensure a good hunt.

What’s compelling about the drawing is that not only is it of a half-man, half-animal creature, but it shows the close connection that early man had with the natural world.

Unlike today, where most of us live in urban areas and our only interaction with animals is with our pets, or with the animals we see in circuses or zoos, ancient cultures were much more involved with the natural world and the creatures that lived within it.

Animals were hunted for food, their skins provided clothing, and they were both prey and predator. Even when humans began to live cities and engage in agriculture, there was will a strong sense of kinship with the animal world. Creatures that were once wild were domesticated in order to plow fields or to provide a steady source of sustenance.

Consequently, for many centuries, our ancestors, scattered as they were across the globe, lived in both harmony and fear of animals. It was, therefore, inevitable that humans would begin to tell stories about the strange, beautiful, and frightening world that surrounded them, and that those stories would involve the shifting and blurring of the boundaries between the human world and the animal world.

The Egyptians, for example, worshiped gods such as Anubis, who had the head of a jackal. Or Bast, who sported the head of a cat. The ancient Greeks have numerous myths that involve animal/human transformations. The gods of Olympus were notorious for turning mortals into animals as punishment for having committed some transgression against them.

Athena transformed the mortal, Archane, who dared to challenge her to a weaving contest, into a spider. Another mortal, Actaeon, happened to observe Artemis and her companions bathing. Affronted by this outrage, Artemis changed him into a stag and he was torn to piece by his own hounds.

Zeus, king of the gods and, as described by Gaius Baltar in Battlestar Galactica, a serial rapist, often transformed himself into various creatures in order to have his way with the women he wanted to seduce.

Far to the north of Greece, Viking warriors known as berserkers were also notorious for their wild, beast-like behavior. Clothed in animal skins, these warriors would take on the qualities of animals such as bears or wolves. It is speculated that, like the maenads, the berserkers may have been under the influence of hallucinogenic plants. In any case, the berserkers would foam at the mouth like mad dogs, biting the edges of their shields.

During the Middle Ages, and fueled by the Church’s desire to root out witches, warlocks and others who served Satan, many were accused of being werewolves, vampires, or shape shifting witches. The hysteria reached such a frightful pitch that animals such as pigs, rats, moles, locusts, caterpillars, etc, were actually brought to trial, tried, and executed for murder.

As time went on, the witch-hunting hysteria was replaced by the age of Reason and Science. Stories or tales about shape shifting creatures did not disappear, however. Instead, they began to appear in stories and tales, usually Gothic in nature, which were set in dark, forbidding castles or in strange countries with even stranger-sounding names.

But even in modern times, belief in shape shifters persists. Some years back a woman in Haiti was arrested for turning children into animals and eating them. In Port-au-Prince, a man was hacked to death for supposedly being a werewolf. In Malaysia, a dog was beaten to death. It was believed the animal was a member of a gang of thieves who transformed themselves into animals in order to engage in their crimes.

Why do such beliefs continue to persist? If you take a psychological approach, it’s believed, especially by Jungians, that the werewolf, or any shape shifting creature, is humanity’s shadow self. That they represent the dark, animal instincts we’ve suppressed in order to live in a civilized society. All of us, according to this theory, contain some manner or measure of the beast inside us. Jung said that this shadow “is the primitive who is still alive and active in civilized man and our civilized reason means nothing to him.”

If we look at this from the perspective of a collective shadow that dwells within the collective unconscious of all humanity, it would explain why so many stories of shape shifting creatures appear throughout the world.

Aufhocker – From German folklore. A huge dog that walks on its hind legs and tears the throats out of its victims. Often found near crossroads, waiting for victims.

Andandará – Evil were-cats found in sixteenth century Spanish legends. They sought out human women with which to mate. Their stare is deadly and whenever they were about, crops failed, diseases spread, and bad luck generally followed.

Berserkers – Although not shapeshifters per se, the Viking warriors known as berserkers went into battle wearing only the skins of bears and wolves. They also considered the wolf their totem.

Büxenwolf or Boxenwolf — Having made a pact with Satan, these men changed into wolves when they buckled a magic girdle around their waists. Seeking arcane knowledge, wealth, and power, these were thinking werewolves. In its wolf form, the Büxenwolf holds on to its human intelligence. However, it is only as strong as an ordinary wolf and can be killed with ordinary weapons. No silver bullets needed here.

Ceasg – A mermaid that lives in the Scottish highlands. Her upper body and face are those of a beautiful, well-endowed woman. Her lower half is that of a salmon. Like the selkie, she may become enamored of a handsome young man. When captured she is said to grant three wishes.

Hamrammr – Another Norse legend. Hamrammrs would also wear the skins of animals and take on their qualities. Their power, however, was limitless. This was because with each life they took, they grew more powerful and they could, eventually, grow so strong and powerful as to be impossible to destroy.

Lamia – In Greek mythology, Lamia was a beautiful woman who was seduced by Zeus and bore him children. Hera, consumed with jealously, took away her children. Lamia took human children to replace them. Because of her actions, she was transformed into a beast with the head and breasts of a woman and body of a serpent. She soon began to feed up on the children she stole.

Rusalki – Beautiful girls who sing sweet, seductive songs in order to seduce young men and then drown them. According to most stories, the rusalki were fish-women, who lived at the bottom of rivers.

Selkies – Seal people who can shape shift and appear in human form. They often take human mates and have children, who are sometimes born with webbed feet and hands and a love of the sea.

Budas – In ancient Abyssinia, stories were told of ironworkers and potters who acquired the power to become werewolves on one specific day of the year.

Huli Jing – A Chinese fox spirit that usually appears as a beautiful young woman. It drains the life energy of its victims.

Kitsune – Usually appears in the shape of a woman. Kitsune are believed to possess great intelligence, long life, and magical powers. They are also trickster figures.

Kumiho – Fox spirits who appear in the oral tales of Korea and who can change, among other things, into beautiful young woman bent on seducing men and draining their life energy.

Bouda – Boudas are men of the desert who can transform into hyenas at nightfall then resume their human shape at dawn. Some African tribes believe the hyena form is a favorite form of shape shifting shamans or witch doctors.

Baka – In Benin, a Baka is a spirit creature. It is the essence of a dead person who, while alive, dealt in evil. The Baka returns to Earth after death and takes the form of an animal. No matter what animal shape it takes, however, it is very powerful. Whether a chicken or a lion, it can kill. The Baka can also be a vengeance demon, which returns to avenge its murder.

Crocodile People – Some tribes in Africa believe that the souls of murder victims reside within crocodiles and that those crocodiles may seek revenge for their deaths. They may change into human beings or shift between human and crocodile. Beast marriages with crocodiles are common in some African tales.

Jackal People – In ancient Egypt, jackals were associated with the souls of the dead. In Africa, the jackal is seen as a wise trickster. A person can become a werejackal by wearing a strip of hide across the forehead or around the waist. Witch doctors sometimes assumed this shape in order to travel about safely at night.

Leopard Men – In West Africa, a cult existed of wereleopards. They fed upon human flesh. They brewed a potion known as borfima, made from the intestines of their victims. They believed this magic potion gave them supernatural powers and changed them into leopards.

Mambu-mutu – A half-human, half-fish claimed to have been seen in Lake Tanganyika in the East African country of Burundi. These werefish grabbed hold of people in order to eat their brains and suck their blood.

Again, these are just a small sample of shape shifting creatures in stories, legends and myths from around the world.

As for contemporary tales of werewolves and shapeshifters, there are many, of course, but a listing of them goes beyond the scope of this post.

I will, however, mention my newest favorite when it comes to shape shifting characters.

In the graphic novel series Fables, written by Bill Willingham, the premise is that characters from fairy and folk tales, such as Snow White, Prince Charming, and the Three Little Pigs, have been driven from their Homelands by the Adversary. They now reside in our world and have their own hidden community in New York city known as Fabletown. They refer to themselves as Fables.

The Big Bad Wolf, who once terrorized Fables such as Little Red Riding Hood and The Three Little Pigs, is now Bigby Wolf, the sheriff and spymaster of Fabletown. Looking like a cross between Wolverine and Columbo when he’s human, Bigby Wolf is able to shift between his human form and his Fable form as the Big Bad Wolf. He’s also hopelessly love with Snow White, who divorced Prince Charming when she caught him sleeping with her twin sister, Rose Red.

Anyway, I love the series and I love Bigby Wolf.

So, please, feel free to share some of your favorite shape shifters from myths, legends, fairy tales and/or novels, films or television shows. I’d love to hear about the ones I didn’t mention or have yet to hear about.

Some books and articles for further exploration.

The Werewolf: A Monster for a New Millennium

The Encyclopedia of Vampires, Werewolves, and Other Monsters by Rosemary Guiley

Man Into Wolf – An Anthropological Interpretation Of Sadism, Masochism, And Lycanthropy by Robert Eisler