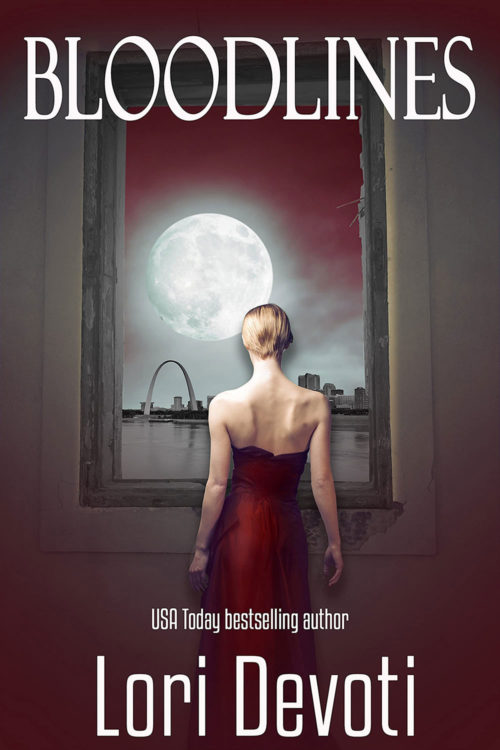 A thirst for revenge that can never be quenched…

A vampire bent on destroying her own bloodline.

And one beautiful, trusting woman as bait.

Will this Dhamphir’s thirst for revenge cause him to sacrifice the only woman he could ever love?

Dhamphir Harry Bisson has been hunting the female vampire who turned his father for over a century. The vampire, who has been building her power by feeding off her own family, thinks her bloodline has run out, but Harry has found one last relative–Lindsey Dennis: beautiful, trusting and the perfect bait.

With no knowledge of vampires, Lindsey thinks Harry is her savior and the key to finding the family she has always dreamed of having.

Will Harry save her? Or will his thirst for revenge cause him to sacrifice the only woman he could ever love?

The water shifted beneath her feet, as if the Mississippi wasn’t just swollen with flood waters, but angry, boiling.

The others had left long before, gathering whatever they held dear and scurrying for higher ground, but not Marie Jean. She held nothing dear—not since that bastard Cruzat doomed her to marriage with the monster others called her husband.

Damn Cruzat. Damn the church. Damn everyone who told her she had no choice—that God’s will was greater than her own.

She would show them all.

Grasping the rough logs of the cedar stockade she clung to, she stared down at the water. She could give in, throw herself into the angry current of the Mississippi, but there would be no satisfaction in that—no revenge.

She had a better plan. She’d thought of it last night, when the others were packing, when her husband was chortling about the Lieutenant Governor’s denial of her request for a divorce. How she had wanted to kill him then—pick up the saber he kept hanging on the wall of their cabin, and pierce his heart, stand there laughing as the black blood of his soul spilled out on the dirt.

But no, her body was too weak. He would have used the weapon on her instead, but damn his twisted soul, he wouldn’t have shown her the mercy of death–just continued the same torture she’d endured for years.

“So, you came.” The voice was low, masculine in a way that sent shivers of expectation up Marie Jean’s spine.

She turned. He stood an arm’s length away, his feet braced on the roof of a cabin, his waist-length hair clinging to his bare chest. His eyes glimmered at her in the growing darkness. A second shiver danced over her rain-soaked skin.

“You expected me?” She pressed her back against the stockade, her heart beating like a bird’s.

“Come.” He held out one hand. “The water is rising. There isn’t much time.”

She paused only an instant before slipping her work-calloused hand into his and letting him pull her to the safety of the roof beside him.

He stared down at her, his eyes an eerie blue against his dark skin.

“Will you help me?” she asked. Her fingers tangled in his hair; her palm brushed his skin.

She swallowed, her heart expanding at the thought of her vengeance. “My husband dead, and then…” she paused deciding what to ask for next. “…a curse. Can you curse them all?”

He threw back his head, laughter rolling from his throat. “A curse? This…” He swept his arm out, gesturing to the hellish waters of the rising Mississippi surrounding them. “…isn’t curse enough?”

She narrowed her eyes, thinking of her sister and her aunts, all prim and pious. Judging her for not accepting her fate. “Not for what they would have left me to. No, I want revenge that will last for centuries, eternity.” The last came out in a hiss.

His arm slipped around her waist, pulling her close against the hard length of his body. “You have the wrong demon, mon oiseau. I am no witch. I have no magic for you.”

“But…” She pushed her hands against him.

He ran his hand down the length of her back, making a shushing sound against her ear. “No magic, but if it is revenge you seek. I can give you that, and the ability to survive this.” He nodded to the water now lapping at their feet.

Marie Jean relaxed her body back against his. “Power, can you give me power?”

He nodded, his head dipping toward her neck as his hand swept her long hair over her shoulder. “Ah, mon oiseau. That I can do.”

The letter was soft as cotton from being folded and unfolded, but even though Lindsey had the short text memorized, she pulled the slip from her pocket again.

She was here. Feeling a bit like Dorothy when she was set down in Oz, Lindsey tugged at her denim shorts and wished she’d worn something nicer. Wished she owned something nicer, nice enough to be dining in one of the side walk cafes that lined the cobble-stoned side walk.

Beside her, a street light, made to look like an old gaslight, clicked on. It was just after eight on a Friday night and the Central West End was bustling. Young professionals out and about, drinking wine and dining on food that to Lindsey’s unschooled eyes looked more like art than dinner. Soft jazz and the scent of melted butter and warm garlic wafted from one restaurant.

A girl, standing behind a hostess podium, glanced her direction. Lindsey dropped her gaze and hurried past.

She looked at the note again. Bloody Harry’s. The name itself was intimidating, but finding the place was even worse. Lindsey had searched the Internet for an address or phone number and come up empty. The email she clutched in her hand was the first promise she’d had of finding family—of belonging somewhere.

Drawing in a breath, she turned and walked back to the hostess. The woman raised a brow, but more in question than in judgment of Lindsey’s appearance.

A couple, dressed for the theatre or some other high class entertainment that Lindsey couldn’t imagine, brushed past her, jostling her. She took a step to the side. The hostess plucked two menus from a slot on the glossy black podium, tucked them under her arm and strode off. The couple followed.

Lindsey stared after them. Then, feeling the attention of the other patrons pressing against her, she took a step back onto the road.

“Did I hear that you are looking for Bloody Harry’s?” A woman dressed in a short flowy dress, belted at the waist, tilted her head to the side.

The woman’s eyes were bright green, an unnatural green that made Lindsey want to look away. She forced herself to keep her gaze steady and nod.

“How…” The woman placed her index finger on her lower lip and pulled, giving her a pouty screen siren look. “…did you hear of Harry’s?”

“Really? Interesting.” The woman tilted her head again and studied Lindsey as if measuring her for size.

Lindsey resisted the urge to pull back her shoulders or adjust her shirt which suddenly seemed to cling too tightly in some places and gap in others.

“Well, then…” The woman took a step closer, forcing Lindsey to move back, into the glow of the street lamp.

The woman inhaled with a hiss, and her eyes glittered.

Every instinct telling her to run, Lindsey lifted her foot. A pale hand, tipped with perfectly manicured magenta nails, gripped Lindsey by the arm. “Then you must be welcome at Harry’s.” She lifted her free hand and gestured across the street to a line of iron fencing. Another cafe sat behind it.

For a second, Lindsey thought the woman was toying with her. Then she saw the sign, Bloody Harry’s, small but, even in the dusk, impossible to miss.

Lindsey had walked down this street three times. How had she missed it?

“It’s in the basement, outside entrance. Tell Harry, Emilie sent you. He can pay me back later.” She laughed, a low rolling sound that made Lindsey shuffle her feet and glance toward the street.

“Anyway.” Emilie released her hold on Lindsey and waved her hand toward the sign. “You’ll want to get inside soon, while it’s still early and somewhat light.” She stepped back, but didn’t leave.

A strange mixture, of compulsion to do as the woman had said and a stubborn desire to do the opposite, filled Lindsey She stood rooted between the two.

And with that one word from Emilie, Lindsey found herself moving toward the small painted sign and whatever business lay below it.

A cafe sat on the ground floor of the bar’s building. It wasn’t as busy as the cafe Lindsey had just left. It also had a different vibe than the other businesses she had passed, more urban grunge than upscale professional. Alternative rock flowed from the windows, open despite the heat, and the smell of coffee and burgers engulfed her, making her stomach rumble.

A slim man dressed in clothes so dark he blended into the unlit patio area’s background stood as she approached. Lindsey slowed her steps, but the man simply crossed his arms over his chest and waited.

Unsure, she walked closer, this time stopping at the top of the metal steps that led from the street to a door below. Bloody Harry’s door.

“Opens at ten.” The man from the cafe stood two feet away. His arms were still crossed, but his body was stiff and his gaze intense, and, somehow, he had moved twenty feet, past an iron fence, in a matter of seconds.

He sniffed, a loud almost sensuous sound. “You haven’t been here before.”

A statement, one that made Lindsey slide her feet to the side to put more distance between her and the man. Her hip bumped into the line of fencing, designed to keep unsuspecting pedestrians from tumbling down the basement stairs.

“Emilie sent me,” she murmured.

“So, you haven’t met him.” His eyes flicked from her to the stairwell, and for a moment, Lindsey thought he might leap over the railing and grab her.

Lindsey’s fingers tightened on the metal handrail. The stairwell was unlit, stepping into it would be like descending into a well. But the man. She couldn’t help but want to get away from him.

Staring into the darkness, cold beads of sweat ran down the back of her neck.

Behind her something hissed. Hot breath raced down her neck. Standing on one leg, her other foot moving forward toward the step below, she teetered. Her body lurched, and she hit the metal steps hard. Pain punctured the balloon of panic that had engulfed her. She tumbled forward, down the stairs.

Then she hit, not the cold hard concrete she’d expected, but the solid warm mass of a body, a male body that scooped her up and held her pressed against his chest.

Struggling to keep the tears that had built up behind her eyes inside, she inhaled and clutched at the man’s clothing. Her face pressed against stiff cotton. She could hear his heart thumping in his chest, slow, steady and more reassuring than any mantra she could have muttered. She concentrated on the steady beat and waited for the panic that had griped her to subside.

“It appears Emilie was right to call. She said Randall is about. Was he behaving badly?”

A light switched on overhead, and Lindsey squinted against the unexpected glare.

“Oh.” The man holding her exhaled the word, so softly she wasn’t sure she’d heard it correctly. Then he flung open the door behind him and strode into the bar.