Today Jennifer Rardin author of the Jaz Parks series joins us! I have heard all kinds of buz over Jennifer’s series and am really excited to get the scoop on her and her books!

Author of: The Jaz Parks Series…Once Bitten, Twice Shy; Another One Bites the Dust; Biting the Bullet; Bitten to Death; One More Bite (coming January 5, 2009)
Favorite Candy: Reece’s Peanut Butter Cups
Favorite Cartoon Character: Scooby-Doo
Super Power Most Covets: You know the one that makes your boobs so springy they try to leap out of every outfit you wear? Yeah, that one.
Favorite Vampire: Vayl (who is winning a squeaker over Angel even as we speak)

Q.) First can you tell us about your Jaz Parks series?

J.R.) Jasmine Parks is an assistant assassin. Didn’t know they had those, didja? Well, there’s a lot the CIA doesn’t share with the general public. Minor facts like the existence of the tiny department Jaz works for. Or their hero-worship of her boss, Vayl, who (as mentioned above) also happens to be a bloodsucker. It helps that he’s Edna-put-your-knickers-back-on! gorgeous. And trying really hard to behave. 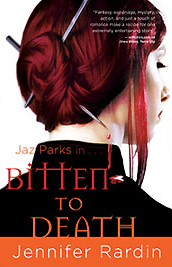 Jaz and Vayl spend the majority of their time chasing down evil pricks who’ve convinced themselves that mass murder is the only way to bring the U.S. around to their way of thinking. In their spare time our heroes like to crochet afghans for homeless orphans and volunteer at the nearest food pantry. Naw, that wouldn’t even work as a cover story. Free time either means that they’re circling each other like a couple of suspicious dogs, trying to decide if assassin romance would cause some sort of implosion at the earth’s core. Or they’re trying to straighten out their pretzular (yup, that’s a word—try it next time you play Scrabble) family lives.

Q.) What about your take on vampires, do you stick with tradition or tweak it a bit?

J.R.) I like to honor the masters while adding my own flare. So, while my vamps still rise at night, sizzle in the sun, and avoid holy sites like junior high boys shun the dance floor, they each come with their own unique abilities called cantrantia that jack up the badass in an oh-crap-run-for-the-hills sort of way.

Q.) Why vampires? Didn’t people warn you it had been “done?”

J.R.) People didn’t have to warn me. Oh baby, I knew. Which was why I never intended to dip my toe into such muddy water. But my husband gave me a nice, gentle shove. Lucky for me there was room for one more!

J.R.) I’d definitely be on the hunt for sharpened edges. Which leads me to a rather hilarious train of thought. In our uber-safety-conscious world, how hard would it really be to find an item so patently dangerous just lying around? After all, it’s a lawsuit waiting to happen. So here you are, running for your life, the bad vamp’s breath practically steaming up the backs of your eyeballs, and you can’t find a broken fence slat or a jagged shovel handle to save your life. Literally! If vamps came into this world, I’m afraid they’d have us beat for sheer lack of handy weaponry!

Q.) Who makes the best hero—slayer or vamp? Why?

J.R.) It’s gotta be the slayer. Because deep inside we all want to be heroes. And my guess is that it’s easier for us to identify with slayers than vamps.

Q.) Ultimate fighting challenge, you have a choice of a vampire, a werewolf or a witch as an opponent, who do you pick and why?

J.R.) The witch. Physically a vamp or a werewolf is going to kick my ass every time. But a witch? I just might be able to punch her lights out before she can get a spell off. Plus spells are tricky beasts (pardon the pun). If I pull out the bob-and-weave, she might be laughing so hard at my Mohammed Ali impression that she totally botches her attack. Again, I win. Yup, I’d definitely prefer to face the magic.

Q.) Are you a plotter or a panster? Character-driven or plot driven? Ever try to be the opposite? Do you have a set method you use when starting a book?

J.R.) I’m character-driven. Big-time. Which forces me to work very hard on my plots, because the last thing I want is for my readers to say, “Ho-hum,” and put the book down.

I have come to the point where I’ve got a little routine going on start-up. First I take about three days just to think. This is a semi-crazed time during which I do general household chores while talking to myself. Occasionally I’ll say, “Yeah, that’s it!” and dash upstairs to record my latest bright idea on the laptop.

The second step is a detailed outline that might take me through the first fifteen chapters, or about halfway. I know at that point I’ll want to go back to the beginning and replot anyhow, so there’s no real point in plotting anything after that. I do have a vague idea of how it all ends, but usually nothing specific until I’ve written those first fifteen and completed the outline. Even then, even after I’ve written the ending, I know I’ll probably change it at least twice before I’m happy with it. So I don’t cuddle with the first draft. We kinda nod to each other respectfully, like strangers in an airport, realizing we’ll never see each other again. And then I go back and do the fun writing. The part where spit and polish finally begins to make the jewel shine.

J.R.) Smartest thing for my career? Marrying my husband. I’m not kidding. I would not be writing today if not for him.

As for making a change . . . I wish I hadn’t let most of my English professors get inside my head so much. They really had me believing for a while that if I couldn’t write like Shakespeare I shouldn’t bother. I nearly lost my Voice because of that, and it took me a long time to regain it.

Q.) Can you describe three things in your writing area that tell us something about you? 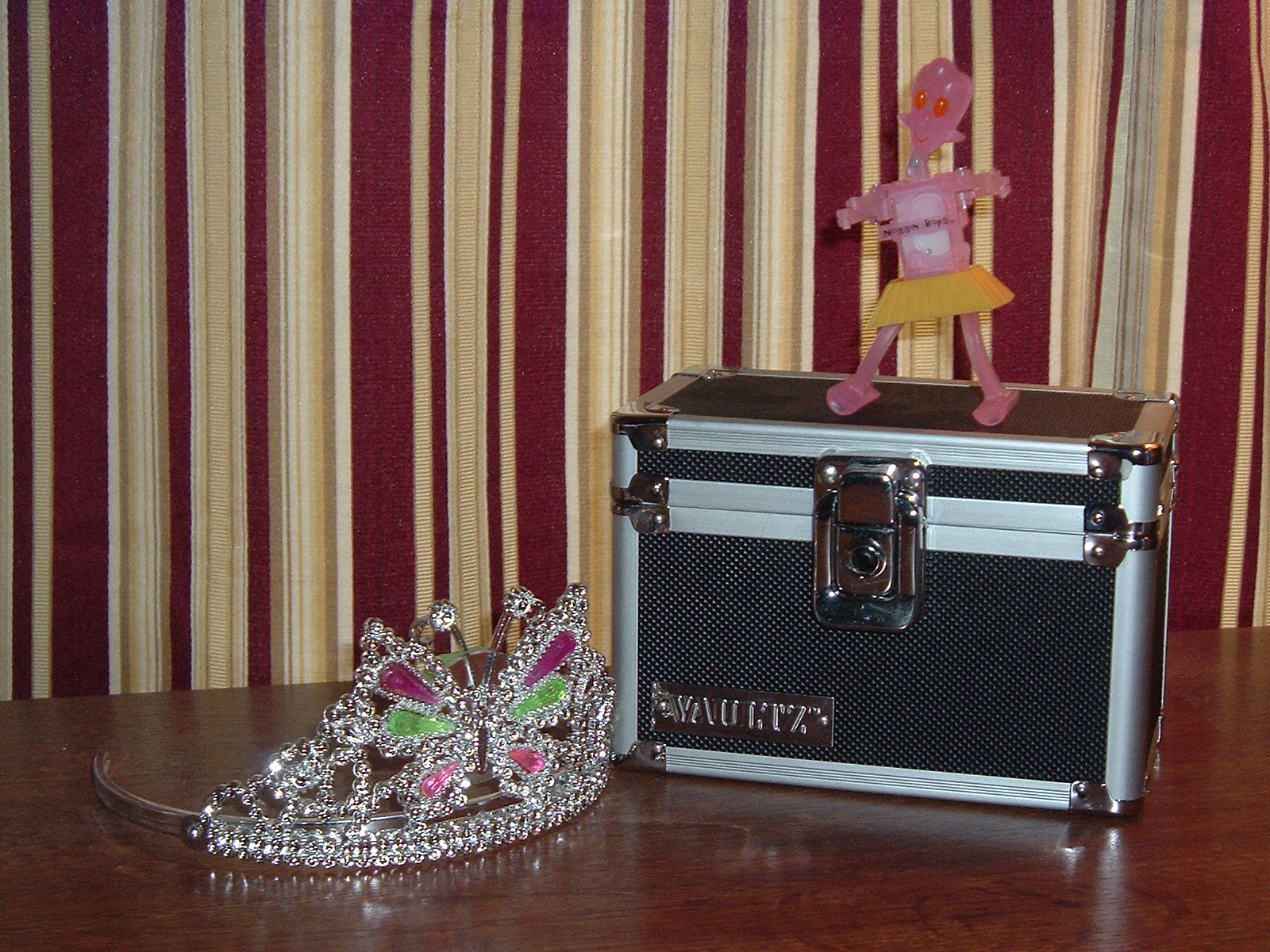 J.R.) I’m sending a picture that includes a windup robot who I call Delilah.2. She dances before all my writing sessions. Sometimes I’ll turn the knob and say, “How’s it going to go today, Deliliah.2?” Then she boogies, and I know it’s going to rock. Good fun! The funky silver and black card file contains all the pertinent information I need related to the Jaz Parks series. And the light-up tiara is for those special occasions, when I want to slip into domestic goddess mode and prance around the house announcing, “We are a hungry author! Feed us, dammit!” After which I get my own grub because, ya know, domestic goddesses gotta watch what they eat or they will get diabetes and go blind.

J.R.) I am prepared to start a new series after I’ve finished book eight of Jaz’s adventures, so I’m hoping that’s what happens next, although you can never tell in this business! I’m also working on a YA book called Shadowstruck. Since it’s been relegated to my back-back burner, it’s hard to say when I’ll be done, but fingers crossed that my agent reads the final result and then does a little Delilah.2 dance around her living room!

Order Jennifer’s Books:
Once Bitten, Twice Shy
Another One Bites the Dust
Biting the Bullet
Bitten to Death
One More Bite