30 Days of Vampires, A Rare Stake

A wooden stake driven through the heart kills a vampire, right?

Well, hell. A stake through the heart would kill most things. There must be more to it than that.

Originally the idea of driving a stake through a vampire’s heart–really any part of his torso–was to pin him to the ground in his grave and prevent him from rising again. Certain wood (ash,
hawthorn) was best for this. In the popular culture, the process became more general even as the target grew more specific. Any sort of wood penetrating a vampire’s heart would stop him. Later the rules loosened even more, so that anything driven through the heart, from a rapier sword to a car’s radio antenna, would do the trick. Essentially, it seemed, the heart is where the vampire is.

If you accept the vampire as a supernatural entity bound by rules that have nothing to do with biology, this is fine. However, the moment you begin applying logic to create a rationale where this works, you run up against the simple fact that piercing the heart of any living creature will, in fact, kill them. George A. Romero’s marvelous 1977 film Martin explicitly makes this point (no pun intended). 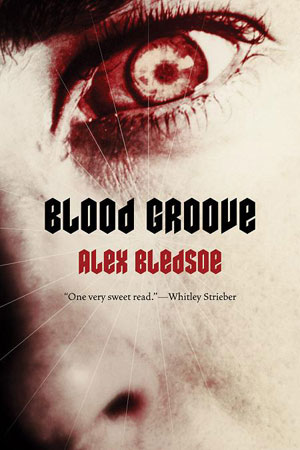 When I began writing my upcoming novel Blood Groove (Tor, April 2009), I needed to both slay and then resurrect my vampire protagonist, Baron Zginski, all within the first chapter. I decided that for my vampires, the power source for their undead existence was located in their hearts. They could repair damage to any other part of their body, but once the heart was destroyed, that was it. It was an ironic reflection of their mortal existence.

So in my novel, Zginski is killed, and revived, by the slimmest of margins. His heart is pierced by a thin knife, which neatly slices into it but doesn’t tear or destroy the organ. When that knife is removed sixty years later, his vampiric powers are able, just barely, to restore him to existence. To borrow from Seinfeld, it’s “a one-in-a-million shot.”

I also decided that the vampires, like most mortals, wouldn’t know that much about how their bodies really worked. After all, how many of us really understand the process that takes oxygen from lungs to tissue, or how our pancreas helps break down sugars into energy?
Unless you also give your vampires supernatural knowledge, they wouldn’t know, either. Like mortals, vampires operate within the boundaries of their own experience and what they’ve been told by sources they trust.

The one new source of information that rose to prominence while Zginski was in limbo, was the movies. So when he wakes in 1975, he meets other vampires who know about themselves only from vampire B-movies. They sleep in their coffins, think they must kill each victim and believe they would die if exposed to sunlight. They have, needless to say, a lot to learn.

And that’s the beauty of vampires. They can be anything, and more than one thing. As a metaphor they’re limitless, and as a figment of our collective imagination, we never tire of them. I certainly haven’t.

Visit Alex on the web at AlexBledsoe.com.