Today Rowena Cherry, paranormal romance author, has stopped by to answer a few of my questions. Welcome, Rowena!

Favorite Cartoon Character: Pepe Le Pew? Wile E Coyote? The Dreamworks Anglepoise lamp. I change my mind a lot, and I don’t watch cartoons much, so you get a stream of consciousness answer.

I enjoy the cartoons where poor Pepe (the skunk) falls in love with a painted cat, and pursues her indefatigably –but with humor and tenderness. However, he IS a bit of a stalker, so maybe a villain? Wile E just wants to eat, doesn’t he? Some of his methods would suggest not. If he were successful, there wouldn’t be much left of the Road Runner. So, I’ll go for the inquisitive, bouncing lamp. It’s cute, funny, and it guarantees a good story will follow.

Q.) First tell us about your books.

RC.) Depending on how you count, there are either five or three and a half. The paperbacks are Forced Mate, Insufficient Mating Material, and Knight’s Fork.

Then, there’s Mating Net, which is a 58 page short e-book. It’s a “prequel” by which I mean that it was written after Forced Mate, and tells a story that took place a generation or two before the start of Forced Mate, when Grandmama Helispeta was a devious and ambitious young Princess, who outsmarted herself, and ended up in bed with a much bigger matrimonial catch than she intended.
There is also an electronic version of Forced Mate, which is similar to the paperback, but had a different editor, and is a little bit heavier on the science fiction in that it makes the unflattering comparison of humans with primeval wolves, discusses the battlefield applications of urine, and mentions astrophysics.

FORCED MATE, was my first book, and is the book of my heart. I spent ten years writing it, and then re-writing it… and then revising it again when I sold it and was told to remove 50,000 words.
The title is taken from Pandolfini’s term for the point in a chess match where the winner will be decided by a race between the two Kings to make a pawn his Queen.

It’s a futuristic take on the abduction of Persephone by the mythological dark god of the underworld. I took almost every traditional situation in an abduction/obligatory-travel Historical Romance and had fun. I made the hero an all-powerful, alpha-male alien, a god-Prince with a nasty reputation.

In Forced Mate I introduced ‘Rhett (who is the hero of Knight’s Fork) as the ultimate altruist. He tried to stop one of his older brothers from having unwise sex. (He does that a lot, that’s partly why his brothers get mad at him.) So, his big brother thumps him. As a result, Rhett is arrested, imprisoned and threatened with torture and death. He risks his life to protect the bad-ass older brother who hit him, and also his beloved half-sister. 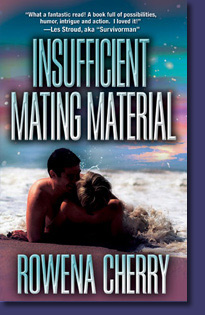 INSUFFICIENT MATING MATERIAL takes up almost immediately after the final scene of Forced Mate. Wild, impulsive, one-off sex has consequences, especially when the parties are less than discreet about it, and one of the participants videotapes the proceedings.

Crown Prince Tarrant-Arragon decides that his younger sister, Princess “Marsh”, needs a husband before she creates a bigger scandal as a result of her politically disastrous choice of bed partner for a defiant one-night stand, and her assumption that the well-hung hunk she bedded was a lesser being and a commoner, and that contraception would not be necessary.

However, the Royal shotgun wedding does not go smoothly, and Tarrant-Arragon makes a practical decision to forcibly maroon the unhappy couple on a tropical island, and to shower them with aphrodisiacs until they consummate their union.

What he does not realize is that someone very powerful wants the couple dead.
In case you were wondering, Insufficient Mating Material is a chess term for a no-win situation.
Knight’s Fork (the chess position) is about tough choices in an impossible situation where you can only save one of two (or more) threatened pieces. Often, with a Knight’s Fork, it’s the Queen and a Castle that are threatened.

KNIGHT’S FORK begins right after the climax of Insufficient Mating Material, when the entire rogue branch of the royal family is too aroused to go to bed, so they look around for someone to torment, and pick on ‘Rhett and his unbelievable reputation for virtue and chastity.

His Tarot reading has hardly begun when a card showing a naked Queen of Wands turns up in a position suggesting that he has a sordid, sexy secret in his past. Of course, he is not about to reveal that he’s avoiding a real life queen, who is desperate for a sperm donor, and who can’t take “No” for his answer.

Q.) Are you a plotter or a panster? Character-driven or plot driven? Ever try to be the opposite? Do you have a set method you use when starting a book?

Until recently, I’ve always said that I’m a sloth-like pantser. However, someone –not me—has coined a third term. Puzzler. I think I’m a puzzler.

I’ve compared writing one of my stories to doing a 1,000 piece jigsaw of the kind where at least 20 pieces are black, and two or more sides of each black piece are identical in shape as well.

My books are definitely character-driven, which is partly why it takes me longer than it should. I believe that everything that happens to my hero and heroine –that brings them together, or that drives a wedge between them, or that makes sex go disastrously wrong when the time is NOT right—should have a “thusness” or inevitability about it.

I’ve tried to do a book in a month, and an outline in a week, and it has never worked for me. (Laughing!) You should see the results. It’s a mass of fragments of dialogue, aphorisms, philosophy, stage directions, and shopping lists. Only I can understand them. It’s not an ideal method of working.

Q.) What can readers expect to find in all your books no matter the setting?

R.C.) My goal as a Romance author is to give good value. I expect to provide my readers with six to eight hours of amusement, at least a couple of really good laughs, a romantic frisson or two from the sensual scenes, and something to think about when the book is finished.

Ah, and –of course—a happy ending. That goes without saying, doesn’t it?

R.C.) I’m going to be a little bit evasive here. I might as well be honest about giving you a not-quite-straight answer. My editor had me write out not one but two characters who were originally in Knight’s Fork, because she didn’t want to cramp my scope if one or both of them has a book.

There’s a character –actually there are two– who became a great deal more intriguing than I intended them to be. They “refused” to be the stock villains that a plotter might have made them, and left them.

‘Rhett’s quest was initially intended to end much more neatly, with a clear revelation about the mysterious Queen of Pentacles whom he was sent to find, and a new series based around several misfit heroines was supposed to be launched.

Back to Lori: Thanks to Rowena for taking the time to answer my questions. :D To find out more about Rowena’s books, stop by her web site!