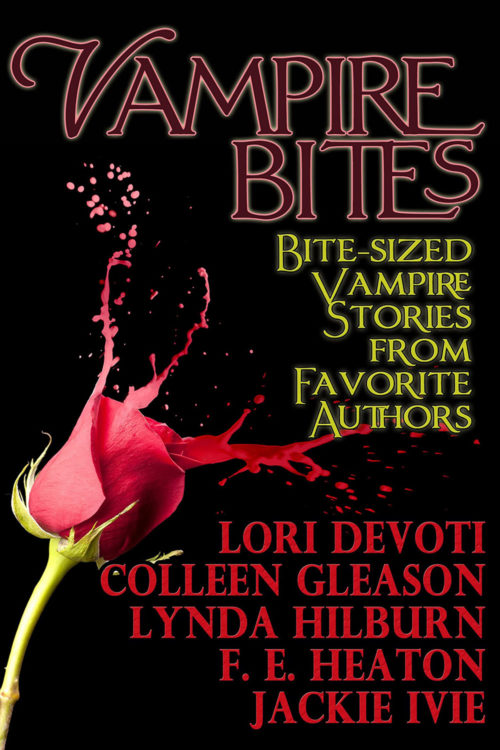 Ready for a nibble? Read on!

Lost by Lori Devoti  (First in Lost Series)
After a car crash that may have taken her friends’ lives, Rachel Daniels finds herself lost on a cursed mountain. Her only hope to escape the place and save her friends is the man she finds wandering through the night; except Cameron Renault is no ordinary man. He’s a vampire and Rachel’s nightmare may have just begun.

Victoria Gardella: Vampire Slayer by Colleen Gleason (A Gardella Vampire Chronicles story)
1820: Victoria Gardella tries to enjoy a ball with her new beau, Lord Rockley—but when bloodthirsty vampires come upon the scene, she must leave the fun in order to employ her stake alongside the grim Max Pesaro (vampire slayer) and the mysterious Sebastian Vioget.

Reunion by F E Heaton (A Vampire Realm Series Story)
For Venia vampire Marise, returning home isn’t something she wants to do, but duty dictates that she must investigate the attempt on her Lord’s life by another vampire. Faced with her old home, she tries hard to suppress the memories of happier times with her ex-lover Jascha and the darker ones that led to her leaving, but it becomes impossible when she discovers he was injured in the attack. Is fifty years enough to forgive the one you love for breaking your heart? And can Jascha convince Marise to listen to what he has to say and make her love him again?

Until Death Do Us Part by Lynda Hilburn (Kismet Knight, Vampire Psychologist series)
Denver Psychologist Kismet Knight counsels vampires. Meeting with this couple reminds her that vampires aren’t merely humans with fangs, and some bloodsuckers are harder to counsel than others.