Back to the pirates…

LD: Why pirates? What attracts us to them?

Jennifer Ashley: Who can resist a bad boy?I think pirates are always fascinating because they live life on their own terms, obeying no one’s rules but their own carefully adhered to pirate code. Pirate ships had rigid rules about everything, including how much rum you could drink, an woe to those who broke them. Pirates were also egalitarian–every man on the pirate ship got an even share of the prize, though the captain and his lieutenant got a bit larger share. But it was measured out exactly. In reality, pirates had very brutal, violent, and short lives. Most pirates’ careers were eighteen months at the longest before they were caught or killed.

But it’s easy to romanticize pirates–tough, independent, ferocious fighters out to take what they can from the world. They have courage, an honor among themselves, and don’t take crap from anyone. We’d all love to be that strong and in-your-face.

Darlene Marshall: The general fascination with pirates stems from their living outside the rules and constrictions of society. 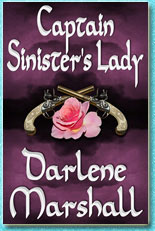 Most of our images of pirates date to 1724 and the publication of Captain Charles Johnson’s A General History of the Robberies and Murders of the most notorious Pyrates. As pirate historian David Cordingly dryly points out, the book “had all the ingredients for a bestseller. It contained graphic accounts of murder, torture and rape in exotic locations.”

It also didn’t hurt that “Captain Johnson” was really Daniel Defoe, a man who knew how to write a rousing story, and that it was a topical thriller–pirate attacks had been increasing in the decade prior to the book’s publication.

Most of our images of pirates come from Johnson’s book, and it was the source used by subsequent fiction writers who chose piratical themes–Walter Scott, Robert Louis Stevenson, J.M Barrie and Rafael Sabatini, to name some of the best known. Johnson himself didn’t let the facts stand in the way of a good read when he was writing “A General History”, and some of it is clearly speculation on his part. And while Cordingly doesn’t mention Byron specifically, his dark and brooding Corsair certainly set a number of 19th c. maidenly hearts aflutter, and also added to the pirate mythology.

So we’ve had a fascination with pirates and piracy going back nearly 300 years, and today’s writers are building on the foundation blocks laid by Captain Johnson. But the reality of piracy was closer to how we view today’s terrorists–stateless, ruthless men (and a few women), who’d swoop down on their prey to maximum effect (the Jolly Roger and similar devices helped terrify and build tension) and often leave no witnesses behind, because as one pirate famously said, “Dead cats don’t mew.”