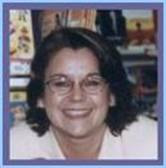 Yay, another Nocturne author joins us. Caridad Pineiro was born in Havana, Cuba and settled in the New York Metropolitan area. Her vampire series, The Calling, debuted in 2005 with Danger Calls for Silhouette Intimate Moments. The stories continue next month with Death Calls as part of the Silhouette Nocturne line.

Q) First can you tell us about your Nocturne release?

CP) My December release, DEATH CALLS, is book # 4 in THE CALLING vampire series, but don’t worry if you haven’t read the earlier books. It stands alone. Also, the three earlier books will be available in an e-book format if you want to catch up with it. In DEATH CALLS, the heroine Diana Reyes must deal with the death of a close friend. That death makes her revisit where she is going with her life and all that she will lose by continuing to love Ryder Latimer, a vampire who can never provide a normal life. Ryder understands her conflict and when she leaves him, he tries to deal with the loss. As he is searching, he discovers Stacia, a two thousand vampire elder who seems to be dealing quite well with her long existence. I won’t give away more, but this book is filled with unexpected developments and an ending that catapults the reader into the following books in the series – DEVOTION CALLS (January 2007) and BLOOD CALLS (May 2007).

Q) Your hero is a vampire, does your heroine have powers too? 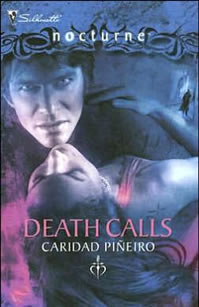 CP) My heroine is human, but totally empowered and as tortured as the hero due to her life experiences. Her first brush with death came when she was 19 and her father was gunned down in front of her eyes.

Q) I know many of your books have Latin characters and flavor—does Death Calls?

CP) All my vamp books have ethnic characters. I think that reflects the status of Manhattan as well as certain parts of the United States. It adds some different to the characters, but first and foremost, it’s the vampire culture that drives the stories.

Q) Who is your favorite character in this book and why?

CP) Diana Reyes was totally alive and amazing from the moment she started screaming for a story. She is my favorite character of all time.

Q) Who do you think is the strongest–your hero or heroine?

CP) My heroine and hero are partners and therefore equal. They each have their strengths and weaknesses, but both are essentially alphas.

Q) Nocturne is billed as “Dramatic and Sensual Tales of Paranormal Romance”. How does this tagline fit your book? What other one word descriptors would you use to describe it?

CP) DEATH CALLS and the books that follow are definitely filled with larger than life situations involving supernatural happenings. They are also totally sexy and edgy and I love pushing boundaries. I think I would add that to the list of descriptions – Novels that Push the Boundaries of Romance.

Q) Would you describe your book as dark? And what does that term mean to you?

CP) Dark. Way dark. What does dark mean to me? That the story explores the deepest and sometimes most dangerous parts of human nature. I look at the demons and their emotions as being metaphors for the traits in the humans around them. The demons reflect things we don’t want to believe about ourselves, but we are sometimes forced to confront.

Q) Why do you write paranormals? What appeals to you about the sub genre?

CP) What appeals to me is the lack of boundaries that I experience in other forms of fiction. The story lines can be much edgier and sometimes harsh, but that brings about amazing depth and also, wonderful character redemption.

Q) This book is part of a series that has spanned a number of lines. Can you tell us a bit about previous books and give us a sneak peek on what else you have planned?

CP) THE CALLING began in Silhouette Intimate Moments and as I mentioned earlier, the three earlier books will be available in e-book format. THE CALLING is definitely a cross-genre series as it started off predominantly as a romantic suspense with a hint of the paranormal. I’ve played with that in each book, alternating from one with little paranormal to one with a lot of it. That has drawn in a number of different readers and I’m pleased that they are all happy with how the series is progressing. The books that follow, DEVOTION CALLS and BLOOD CALLS, will also share that element of being cross genre. I think that appeals to people on many levels and allows for an interesting blend of real world conflict against that brought about by the supernatural elements of the story.

Q) You write for more than one Harlequin line and in more than one genre—is there something about your books that holds true no matter what line or genre?

CP) Empowered women. I think women have come a long way and I always like to show heroines who are in control of their lives, able to make decisions and if need be, to save the hero’s butt!

Q) Who are some of your favorite authors?

CP) Besides all the Nocturne authors? LOL! Kim Harrison and Kelley Armstrong. Jacqueline Carrey. I like novels that push the edge of what’s been done before.

Q) Where can readers find you on the web?

CP) I have a site and blog at http://www.caridad.com

Q) And is there anything else you’d like to add? I love to hear from readers and they can sign up at the sight for my monthly contests and newsletters.

Thanks to Caridad for chatting with us!!