New to You Book: Cozy Mystery – Beaded to Death and a PRIZE!

Welcome to Janis Patterson, author of Beaded to Death, today’s New to You Book pick!

What is your book about? 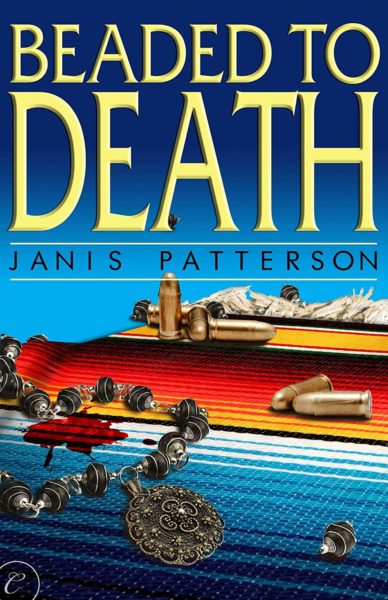 A widowed, middle-aged bead artist returns from a tour of craft fairs to find the dead body of a man she’s never seen before on her living room rug. From there she is drawn into a world of drug smuggling, murder and the care of a 7’3″ nephew on the run from an unwanted basketball scholarship. To complicate matters, a saturnine FBI agent is not only attracted to her, but believes her to be involved in the drug trade.

What type of reader would your book appeal to most?

Someone who likes cozy mysteries with wit, adventure and ordinary characters caught in extraordinary circumstances.

Lilias Ruiz is a tall, blonde throwback to her Viking forebears. A kindly, ordinary sort of woman with an occasionally fearsome temper, she travels the craft fair circuit selling her bead art. She wants a quiet life, perhaps too quiet since her husband’s death. Her biggest struggle is proving herself innocent of the shadow of drug smuggling, a quest not help by her pulling a gun on an FBI agent.

Her determination to prove that she is innocent in spite of overwhelming evidence to the contrary. A sub-plot is the unexpected appearance of her 7’3″ nephew who is on the run from an unwanted basketball scholarship and how in spite of all – including his lack of cooperation – she tries to do what is best for him.

How is your book different than other books in the same genre?

I haven’t seen many books with a heroine who is willing to use a gun to protect herself, however reluctantly.

Not so much romance as the promise of a romance to come. There is attraction between Lilias and the FBI agent, but also suspicion. We are left hoping…

Is your book part of a series? If so what are the other books (in order) in the series and will there be more?

Not yet. I’ve been asked to continue it, but as I am at best lukewarm about series — as well as being buried by deadlines on other projects — it will be a while. If ever.

Where can readers get your book and when?

Available now as an ebook from Carina Press (through most reputable outlets as well as the Carina site) and as a paperback from Worldwide Publications (available through WWP’s club program or — I think! — the Harlequin online store.

Find Janis at her web site ! Get your own copy of Beaded to Death at Amazon now.

To be entered to win an ebook copy of Beaded to Death leave a comment below by March 31, 2014 U.S. central time.

← New to You Book: Comic Mystery - Evil Genius and a PRIZE! Blog Hop: 4 questions about my writing process →