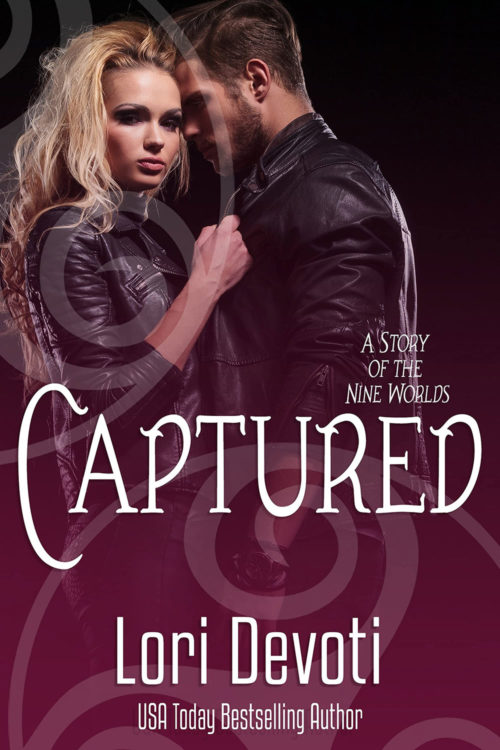 A Story of the Nine Worlds

Captured and determined to escape no matter the cost.

When hellhound Gray Barsk awakens in the dark cell, he isn’t alone. He doesn’t know how he got here, but he knows he has to get out and he can’t let anyone or anything get in his way. Not even the base desires of the beast inside him.

Female hellhound Leve has lived through hell before. Been bait before. She knows her captors’ game. She’s dealt with it for years, but this time, she won’t surrender. This time the male they would force on her will have to kill her first.

To finally get out of Kamp Arena, where hellhounds are bred for fighting, Leve will have to give up the fight and do something much harder… trust. Gray will have to do something just as difficult, resist the pheromones pumped into their chamber and the savage demands of his inner beast.

Will either survive? And if so, at what cost?

Not again. Leve wouldn’t go through this again.

She sniffed the air. Blood, sweat, the smell of male. She’d seen the flash of light as the top of the chute was opened, heard the hellhound’s body being rolled down the metal ramp, felt the impact as he collided with the ground.

He was unconscious. He hadn’t moved since his elegant arrival.

She crept closer, moving on the balls of her feet, using her hands to keep her balance. It was poor form to kill a hellhound while he was blacked out, against the rules of the “kamp,” but she wasn’t in the Kamp Arena right now. She wasn’t scheduled to return until after she’d been impregnated by this male, or whoever followed, until after she’d borne a son or daughter who would grow up to fight as she did now?every day for the enjoyment of the underground followers of the Kamp?or be sold to someone else looking to start their own pack. She almost spat at the thought.

Within arm’s reach of the fallen hellhound, she slowly pushed herself to a stand. First she’d make sure he was unconscious and would stay that way, then she’d figure out the quickest way to end his life. With him gone, the immediate threat would be eliminated. Then she’d wait for her captors and plot a way to explode past them when they opened the damned chute. And as she waited, she’d savor thoughts of ripping them into little bits, feeding them to the hellhounds they kept stored in these cells beneath the Kamp Arena. Perhaps she’d even let one or two live, at least long enough to be thrown in the arena, used to bait some of the most crazed hellhounds.

How would the crowd enjoy that?

A few feet from Gray’s head, there was a whoosh of air. He rolled, grabbed the foot that was being propelled toward him and jerked. The foot’s owner fell, hard, onto the dirt beside him. He wrapped one hand around a boot and grabbed a denim-clad leg with the other?a firm, but most definitely feminine, denim-clad leg.

He paused for a second?a second too long. The female let out a grunt, pulled back her free leg and jammed it into the side of his face. He spat out blood and jerked again, this time pulling her body beneath his.

She continued to fight. With a snap her head collided with his. He bit back a curse, tried to ignore the blood now pouring from his nose.

He didn’t know who this female was or why she had attacked him, but one thing was perfectly clear?she was fighting in earnest and with every intention of beating him, killing him.

He growled, let the fires inside him spill into his eyes, let her see that female or not, he had no intention of rolling over, letting her win.

She growled back, let her own eyes glow. Her teeth snapped near his ear and he jerked back.

“Not again. I won’t go through it again. Jeg vil leve,” she murmured.

I will live, he translated. The words were low, meant for her ears alone, he sensed, more a statement of conviction than threat or promise. Still, he couldn’t stop his own response.

“Only if you back off,” he warned, his ire growing, the bloodlust inside him igniting as the scents of anger and sweat swelled around them.

She laughed then, a cold noise, close to his ear. “But you don’t want to kill me, do you? I’ve been here before. Survived this before. But this time, it won’t happen. I won’t let it happen.”

How long had she been down here trapped in darkness? How far gone was her mind? He shook his head, tried to force her babbling from his thoughts. It didn’t matter. Crazy or not. Tortured or not. She meant to kill him, and he had no intention of dying. His canine mind wouldn’t worry about why she acted as she did, would only fight to win, no matter the cost. His canine form would end this battle quickly, perhaps saving them both.

With a roar, he let the bloodlust win out, let the magic sweep over him, let his body shift from human to hound. If only one of them could survive, he’d make sure it was him.